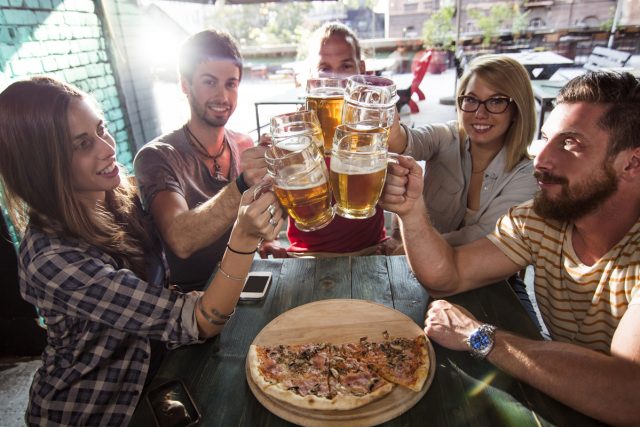 What You Need to Know Before Popping a Cold One

As we move into the hottest months of summer tennis, the 21-plus set is often packing alcoholic beverages for post-match celebrations. If you’re like many players, the temptation of downing a cold brew after a series of matches comes as a close second to enjoying the delicious food and refreshments many teams are known for providing.

With that tasty food and beverage spread in front of you, you may find yourself in a mental debate trying to decide where to spend your valuable calorie allotment: food or alcohol? You pat yourself on the back for choosing to reward your hard work on the court with beer, instead of what you perceive as denser, calorie-packed food choices. Newsflash: a couple of brews have just as many calories as a slice of pizza.

Active people watching their weight and focused on eating for performance know to steer clear of brownies and cheeseburgers, but they often don’t realize how calorically dense their alcoholic beverages are, nor the potential dehydrating side effects on tennis play. And players aren’t totally to blame for this — the FDA doesn’t require alcohol companies to disclose their product’s calorie content, much less all of the possible side effects alcohol can cause, even when consumed after you’re finished competing.

Although alcohol is a liquid, its calories can add up much quicker than you’d imagine. If you were to drink just one beer a day, you would consume an additional 1,036 calories a week, which translates to a weight gain of 15 pounds per year. Additionally, alcoholic beverages during sport can negatively affect functions related to the brain, heart, muscle and thermoregulation.

Contrary to popular belief, there are ways to lessen your calorie intake from alcohol without abstaining completely. Below are a few smart tips to ensure you avoid the health risks and calorie overload that often come with a brew or two after a few sets.

Look for a Light Beer

Drinking light beer instead of regular beer saves you about 40 calories per serving. What’s more, the recent introduction of low-carb light beers to the market has made a big splash with options like Budweiser Select 55, Miller 64 and Michelob Ultra Amber 90. But remember, it is possible to have too much of a good thing — pint glasses of draft light beers can almost double the calories per serving. Typically, higher alcohol proofs are associated with more calories and typical serving sizes of alcoholic beverages vary between restaurants.

To keep tabs on how many calories you’re consuming, stick to bottles. Because light beers contain less alcohol, you may be excited to know that drinking lighter brews may not have as negative an effect on rehydration as medical professionals previously thought. But beware: Even though a beverage may be considered to be “light,” it can contain just as many carbohydrates, if not more, than a soft drink.

Lose the Booze to Lose Weight?

New York Times’ personal health columnist Jane Brody recently reflected on the reality that people seeking to lose weight are likely to become discouraged when they are told to reduce their alcohol intake. As a dietitian who counsels clients on weight loss as well as sport performance, I see the same issues, and recognize the importance of taking an individual’s lifestyle and preferences into account when trying to maintain or lose weight.

One cross-sectional research study conducted by Gregory Traversy and Jean-Philippe Chaput from the Healthy Active Living and Obesity Research Group at the Children’s Hospital of Eastern Ontario Research Institute focusing on “frequent light to moderate alcohol intake” revealed that two drinks or less for men didn’t seem to be associated with an increased risk for obesity, and that for women, having one or less drinks actually had a tendency of a lower overall body weight. The study concluded that light to moderate drinking alone does not automatically sentence one to experience weight gain or obesity, but factors such as beverage type, volume consumed and genetics are what most likely determine impact on weight.

Those wishing to have a cold one after a hot workout may have some evidence to put the naysayers to rest. According to a 2015 study from the University of Grenada, a brewski after the gym did not deplete the hydration levels in the study’s subjects. Sixteen participants performed exercise in a heated environment and consumed either mineral water or beer following their workouts, and test results concluded “a moderate beer (regular) intake has no deleterious effects on markers of hydration in active individuals.”

While this is good news for your hangover, a 2014 study out of Australia suggests that inebriation after your workout may cause inhibition in the synthesis of myofibrillar proteins. Researchers suggest that alcohol ingestion suppresses the anabolic response in skeletal muscle, which impairs recovery and adaptation to training and performance. So, while a lager won’t necessarily leave you high and dry, it may keep you from reaching your on-court goals.

Additionally, Scottish researchers Ron Maughan and Susan Shirreffs found that alcohol has negligible effects on excess urine production (another major dehydrator) when consumed along with adequate amounts of water. According to their research, non-alcoholic beers (containing 1-2 percent alcohol) rehydrate relatively well, while beers containing 4 percent alcohol had a slower rehydration rate. Plan to alternate water with light beer consumption, and you’ll have the benefit of sodium and slight carbohydrate content from the beer to help replenish sweat losses.

Beer As a Post-Workout Recovery Drink?

When a Canadian company attempted a low-alcohol sports drink beverage in 2014 billed as a “fit beer,” the fitness community was buzzing about its potential. While the beverage, called Lean Machine, is no longer in production, the company claimed its high-protein, low-alcohol and electrolyte-fueled mix could rehydrate and replenish drinkers after physical activity.

While this “recovery ale” never hit the shelves stateside, there’s something to the science. Beer’s obvious carb and sodium content may not be enough to rehydrate on its own, but in a 2014 study published in International Journal of Sports Nutrition and Exercise Metabolism, Australian professor of dietetics and nutrition Ben Desbrow was able to determine that beer’s tendency to dehydrate can be reduced by altering its electrolytes and lowering its alcohol content, according to NPR.

Beer may be no sports beverage yet, but since it’s plant-based and contains nutrients not found in Gatorade and Powerade that are believed to have anti-inflammatory and antioxidative effects, there may be a future formulation to hit the grocery store shelves that better suits athletes.

Bottom line: Beer would need to lose most of its alcohol content to be a good sports drink. Aside from dehydration, studies have shown that consumption of alcohol after exercise can impair the muscle recovery process, known as protein synthesis. Anyone looking to imbibe should be mindful that alcoholic beverages increase your risk for heat illness and muscle cramps, especially when lacking adequate hydration.

Moderate Consumption of Alcohol Can:

Page Love is a consultant for the ATP and WTA professional tennis tours and a member of USTA Sport Science Committee. For more information about sport nutrition for tennis, contact her at nutrifitga.com.