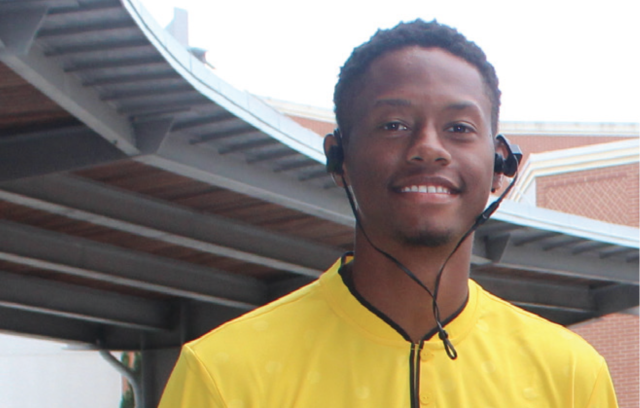 It was a warm July evening, and anticipation was building as the Ramblin’ Wreck made its way to Atlantic Station. Usually seen driving onto the Georgia Tech football field, it was now carrying Atlanta favorite Chris Eubanks to his tennis match at the BB&T Atlanta Open against fellow American Taylor Fritz.

Fritz was a heavy favorite against Eubanks. Eubanks came out confident to take the first set. In a nail-biting tiebreaker, his hometown crowd went wild looking to carry him to finish what would be a major upset.

After getting the crucial break midway through the set, it was time to close out not only the match but his first-ever single ATP win, ending with an unbelievable forehand. The crowd roared with victory. However, the wins for the Yellow Jacket would not stop there.

Born and raised in Atlanta, Eubanks grew up playing tennis. Being able to focus on development was big for him at Georgia Tech under Coach Kenny Thorne, and it showed significantly each year. Twice, Eubanks was able to play the main draw of the BB&T through wildcards and qualifying, but was unable to record a singles win. He lost two heartbreaking matches to tour veteran Radek Stepanek and newcomer Reilly Opelka. He would experience the biggest moment of his career in his third year, feeling more confident, developed and stronger.

After an incredible BB&T Atlanta Open win, Eubanks continued on with a mindset to always treat every match like the finals. After the biggest moment of his career, it showed that he never lost focus.

In his next match, he defeated Jared Donaldson for his second career ATP win, sparking a land on the pro circuit. He qualified for the Masters 1000 Tournament in Cincinnati and won the qualifying matches to reach the first round. Eubanks continued on to play in a grand slam, losing the first round in singles but finding success with his partner Christian Harrison to win a round in the doubles.

After a successful summer, Eubanks was faced with a tough decision: turn professional, missing out on the college atmosphere he loved, or spend one last year with his current teammates and coaches. He chose the latter. When I spoke to him, he said he was excited because he would be able to do something he loved every day, as well as experience and achieve what few others have been able to.

He added that the adjustment to going pro had not been easy, noting the extra work in the gym was not was he was used to, but his love for the game has inspired him to get stronger and amplify his fitness. When asked the advice he would give to junior tennis players hoping to reach a pro level, his advice was to focus on development. “Realize that it will pay off more to be patient and be a better player in three years than to feel the need to max out right now,” he said.

Eubanks is an inspiration to many junior players like me. I wish him good luck and hope he finds success doing what he loves every day.

This article has been lightly edited for clarity and style.