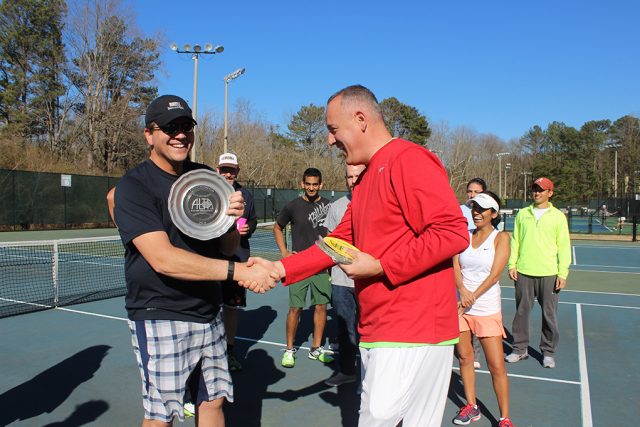 The exhilaration a championship team feels upon winning City Finals is echoed in the heart of the ALTA coordinator handing out the plates. Long before the season’s first team practice, coordinators and league vice presidents are already working on City Finals.

It begins with leveling, the painstaking, hands-on process that ALTA uses to place teams in competitive flights while also trying to limit driving distances. It continues through the season as “coordinators review scorecards every week to make sure the right people are at City Finals,” says First Vice President Bob Fitzgerald. “They also have to approve playoff lineups according to a point system that ranks pairs to ensure fair competition.” As a former vice president for the Men’s League, one of ALTA’s largest leagues, Fitzgerald knows the kind of work that goes into a smooth season and a successful City Finals.

Scheduling courts can be challenging. There are a limited number of venues in the metropolitan area that can host a City Finals. “The Men’s League needs at least three facilities — C level alone requires 14 courts,” Fitzgerald says. The Mixed Doubles League also needed three venues for this winter’s City Finals, putting 16 courts into service at two locations to accommodate play for levels A and B, according to Bill Price, Mixed Doubles vice president.

ALTA also takes into consideration other factors, such as adequate parking and facility policies. “We are looking for venues where the teams can replicate the regular season experience,” says Fitzgerald. It gets even more complicated as multiple leagues compete for facilities at the end of each season. In spring and fall, seven leagues hold City Finals — Men, Thursday Women, Sunday Women, Senior Men, Senior Women, Juniors and Wheelchair.

And rain? Please, no. “We need to have a backup for rain and a backup for the backup,” Fitzgerald says. “We’ve been known to have so many weather delays that a player is on the courts that morning for City Finals and that afternoon for the start of a regular season.”

With court reservations finalized and competitors decided, trophy plates are professionally delivered and securely stored at City Finals venues. Coordinators pick up magnets and bag tags from the ALTA office, count them to make sure there are enough and bring them to the venues. Teams arrive, many of them with family and friends in tow as personal cheerleaders, and the fun begins. “Overall coordinators are there along with an army of coordinators. The league VP is there. The first VP is there. The president is there,” says Fitzgerald.

In addition to competition on the court, many of the Mixed Doubles, Thursday Women and Sunday Women teams compete for best table awards with elaborate themed food tables, says Mixed VP Price. The overalls and the coordinators vote on their favorite tables and prizes are awarded to the winners.

Matches are played and champions are decided. Plates are awarded and photographs are taken. “Coordinators manage all of that. And since coordinators are also active ALTA members, it’s possible that in addition to their volunteer duties, they could also be part of their team’s lineup scheduled to compete that day,” Fitzgerald says.