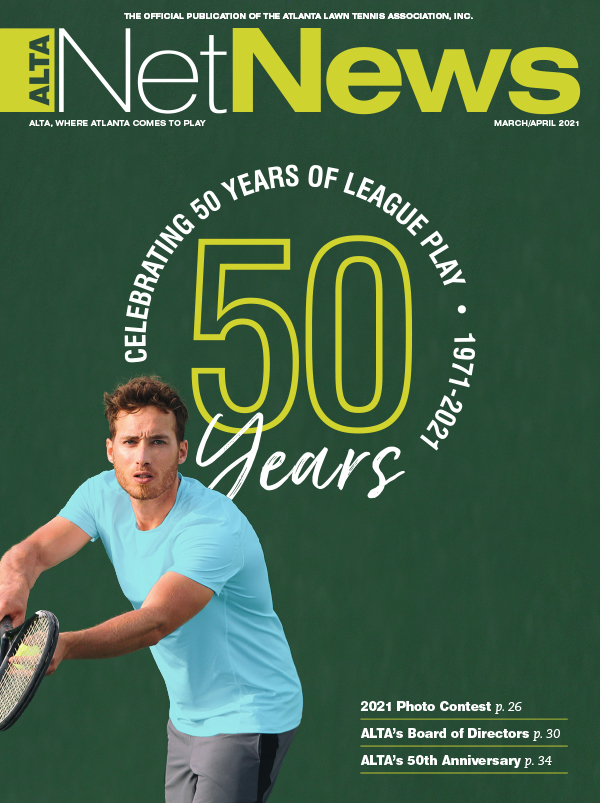 We called up a few friends who remember the early days of ALTA to hear why 50 years of league play is worth celebrating.

League play started in 1971 when incoming ALTA President, Charlie Cox, was searching for ways to recruit more members and finding more volunteers to run tournaments. He had the idea of starting an amateur league for competition in the Atlanta area. Little did he know that the simple formula of forming men’s and women’s amateur tennis leagues with players grouped according to playing ability would go on to become the most successful model for amateur league tennis in the world.

“It’s a simple league,” said ALTA’s first female president (1975), Joan Williams. She goes on to share, “At its core, over all these years, the structure of ALTA league play has not changed, which is why it has been so successful. All that is required for regular adult leagues is a place to play [with at least two courts], and a minimum of 12 players willing to play weekly at an appropriate level.”

Cox went on to write down the rules that have served ALTA well during the last 50 years. Of course, as situations have come up, rule modifications and additions have been made, but the fundamentals have remained the same. This is the bedrock that ALTA stands on today. Williams recalls a team back in 1971 known as the Backyard Biddies. Everyone knew them because they lived in Buckhead in beautiful homes with private tennis courts, hence the nickname. They were a unique group of women who had been playing tennis together for many years. But then this team of backyard tennis enthusiasts either had to split up or play at a facility since ALTA instituted the two-courts rule. So, as the city grew, it became standard for subdivision builders to include at least two tennis courts in neighborhoods, thereby meeting the minimum required to host an ALTA team.

The two-court rule has been in place ever since and as more ALTA teams formed, so did the number of tennis courts being built in subdivisions. Past President, Pat Pickett (1998), remembers that in late March of 1998 a tornado ripped through the suburb of Dunwoody. It happened on a Wednesday night because on Thursday morning her phone was ringing off the hook with Thursday women’s league coordinators asking her what to do since players could not get out of their driveways and some courts were in ruins. In talking with people in the organization, ALTA board members decided to allow the teams to take a rainout and play the matches on the opponent’s courts. It was a harrowing situation, but the basic fundamental rules provided a guiding light to keep things running smoothly. 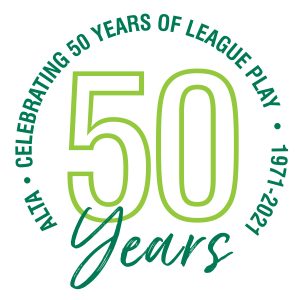 In the 50 years since league play started, ALTA has become a way for people in metro Atlanta to connect and grow friendships that endure the test of time. “We moved here in 1977 and I started playing tennis in 1983 when ALTA was exploding in membership,” recalls Pickett. Nearly every subdivision had courts and could form teams. It was a wonderful way to meet people. In ALTA, there is a level for everybody, and this appeals to people. “I remember going to City Finals, and it was like old friend’s day,” Pickett continues. “I became my son’s team mom, then a Junior coordinator, and went on to become Junior League VP in 1993-94.”

Pickett also recalls back then that Roster Day was quite a spectacle. Captains would submit their handwritten rosters, and all the coordinators who were all volunteers would get together and sort out all the flights and create the schedules. “We put in long hours, but we all became instant friends,” she says.

Jean Watson, past president (1989) and chairman of the board (1990, 1991, 2007) recalls how ALTA was such a huge part of her life. “It was good friends, good exercise, and good food,” she says. “ALTA brings Atlanta together. It’s how singles, moms, dads, and kids get to know one another and develop friendships all over the city. Whether it was a public park, country club, or neighborhood, ALTA opened up the city to all members by giving them access to courts in different places they might never have visited.”

Joan Williams remembers how her week used to revolve around ALTA league tennis. On Mondays, her team would get together and the captain would give out the pairing. On Tuesdays, her team would have drills with a coach; she would have a pick-up match or rest on Wednesdays. Thursdays were the big match day; and Fridays were finally a day to run errands and plan for the weekend. Sound familiar?

Past President, Bert Ardoyno (1984), and his wife Sadie, herself a past Mixed Doubles VP (1982) and Sunday Women’s VP (1985-86) remember how they would live, eat, and breathe ALTA tennis. They moved to Atlanta in the early 1970s, looking for a place to play tennis and ended up forming the first ALTA men’s league and women’s league at the Rivermont Country Club in 1973. He started at the C1 level and finished at AA3. “We’ve been involved with ALTA non-stop for over 43 years, been coordinators or officers, and have met some of the most wonderful people in Atlanta,” Bert recalls. “We’ve met all the pro tennis players that would come to town to play in tournaments, since we worked at all of them.”

Annually, within ALTA, they would have an outing with all the board members and coordinators, which included lunch and playing tennis. “We had a such a close relationship with everyone,” Sadie shares. “It’s hard to explain what ALTA has meant to us. It has been so much a part of our lives; we’ve never taken a break, and after all these years are still Mixed Doubles coordinators.” 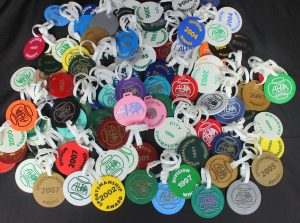 One of the pivotal reasons ALTA league-style tennis had explosive growth from the 1970s through the 1990s (grew to over 80,000 members) was that anyone could play and have fun doing it. It doesn’t matter the level of experience or talent; anyone can pick up a racquet at any age and find a place to belong. Watson remembers the time her team from Vermack Swim/Tennis Club watched her opponents pull up in a new Cadillac, and they all hopped out, seemingly to intimidate her team. However, Watson’s opponents soon realized they just locked all their tennis equipment in the car. Not knowing these ladies, Watson still drove them to the nearest Cadillac dealership to get a new key so they could retrieve their equipment and play. “I jokingly told them I was kidnapping them so they would have to default,” Watson remembers.

All joking aside, they got the key, unlocked the tennis gear, and the matches proceeded, only to have Watson’s team lose all five lines, but she still can laugh about it.

Some of the fun of ALTA is serving in the organization. Both Ardoynos remembers a time when Sadie was running for ALTA VP, and a write-in candidate decided to run against her. At the annual meeting when everyone gathered to vote, this woman did not show up, but someone spoke on her behalf. The voting proceeded, and Sadie won the office of Business Women VP. Later, it was discovered the reason why the woman did not show up was that she had been arrested by the FBI for money laundering. It was the talk of the town, as everyone laughed about how they dodged a bullet.

Another fun tradition in ALTA has been the sharing of food at matches. This may have been temporarily stalled because of the pandemic, but this custom is one of the things that makes ALTA different from other tennis leagues. It fosters the interpersonal aspect of ALTA, which demonstrates that ALTA can be considered food for the soul. Good food and good tennis just go together, and nowhere has this been on display more than at the ALTA City Finals. Williams remembers, “The most fun is had by the C-level tennis players. They would go to the DeKalb Tennis Center for City Finals and go all out with creative table decorations and showcase elaborate finger food and beverages — and many would even show up in team uniforms!” Of course, the A-level players would never think of this, she added.

What started as simple league play for men and women 50 years ago has grown to include Sunday Women, Junior boys and girls, Mixed Doubles, Senior Men & Women, Senior Mixed, Senior Day Men and Senior Day Women, and Wheelchair leagues. Each ALTA league offers the opportunity to connect, to compete, and to cherish not only the wins and losses, but all the benefits of being active and belonging. The fundamentals, friendship, and fun of consistent competition are what keep ALTA members coming back for more, year after year.

1986
The ALTA Foundation is formed

1991
Singles/doubles format discontinued in all leagues

Georgia Summer Special Olympics Are Back! 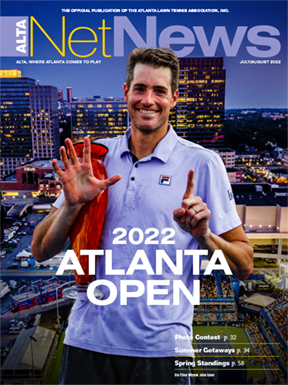