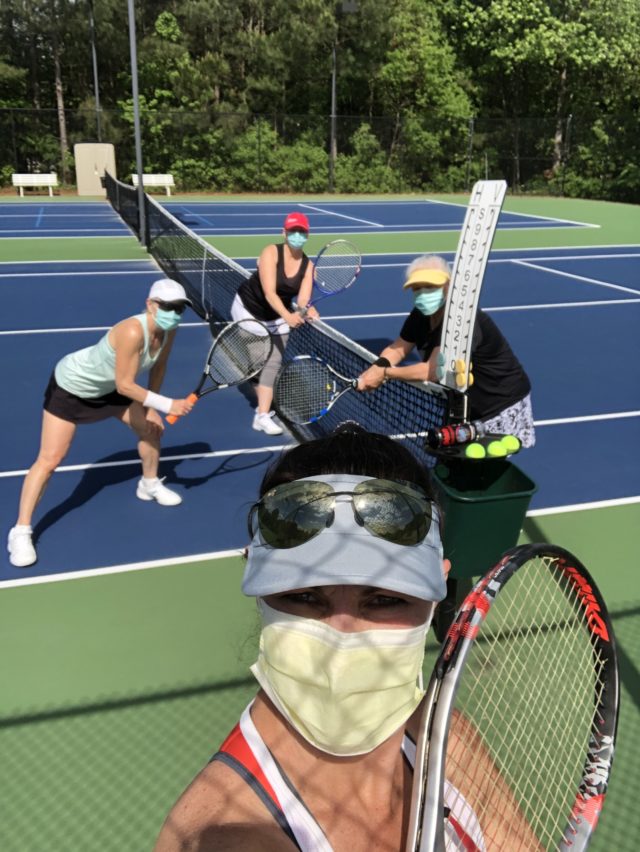 When the state of Georgia shut down because of COVID-19, no one could have predicted all of the consequences of such a measure. However, we quickly learned the true value of our friends, family restaurant owners whom we support, and those simple things we take for granted. First responders, healthcare workers, truckers, and grocery and food store workers have become heroes. We also have come to understand how the game of tennis and league play affect us in so many ways.

Now, tennis is returning, and ALTA is back for the summer. It’s time to dust off the cobwebs from your racquet. Just ask Brenda Garrett from Lifetime Tennis and Athletic Club in Peachtree Corners who literally did just that. Garrett was playing tennis four to five times per week until mid-March when the lockdown began. Like her, most people went cold turkey and had to stop playing tennis. So in May, after 11 weeks without tennis, Garrett pulled out her racquet for a friendly match and noticed the delicate cobweb which she had to remove to get ready to play.

Now, others are getting back into the swing of things and preparing to return to tennis. Facilities are opening, and ALTA league play is underway. The participation numbers for both the Mixed Doubles league and the Senior (45+) leagues have been beyond our expectations. There are more Senior Women and Senior Men’s teams than last summer. We’ve also had nearly 90-percent of our Mixed Doubles teams return for this summer.

We are reminding everyone to follow your own facility’s guidelines along with the recommendations from the CDC and other health professionals as you return to the court. ALTA has a list of health and safety recommendations on its website at altatennis.org.

Several tennis facilities have completely overhauled their court system, developed sanitary guidelines, are changing the way lessons are played, and are making sure their tennis locations are operating as safely as possible. One of the tennis centers headed by the UTA at James Creek began Phase 1 of its re-opening on May 16. Several safety precautions were implemented as part of the overall plan. Temperature checks for all instruction and 4:1 student/instructor ratios are currently part of the daily routine. Each indoor court has a sanitizing bucket with hand sanitizer as well as masks (if requested) and gloves to be used when serving. All participants in any lesson or drill format are instructed to push balls to the back curtain and/or net with their racket (no hand touching tennis balls), and tennis pros are using hoppers to pick up.

Stewart Russell is one of the UTA partners at James Creek and says the amazing staff has been instrumental in helping to coordinate the “new norm” for instruction. “We all learned the importance of Zoom meetings and training prior to opening in May,” said Russell. He added that creative lesson planning includes what they call “COVID 6-feet separation doubles.” You also can see the “6 feet separation air high five,” a way to reward your partner when a good point is played.

In late May, they ran a UTR event and had the 52 participants separated with cones upon check in, followed by a shotgun start for their first match. Each participant was given a different numbered can of balls to be used when serving. “It was actually really fun to watch players embrace some new sanitary ways to still compete,” Russell said.

A-HEAD of the Game 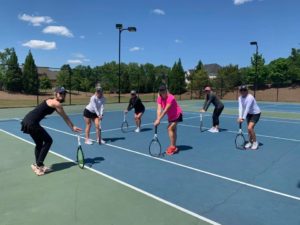 Several Atlanta neighborhoods are not wasting any time getting back out on the tennis court in a safe and responsible way. We want to give a shout out to the ladies of Blue Valley in Milton who are big HEAD racquet supporters and are practicing safe social distancing while trying to get back in shape for tennis.