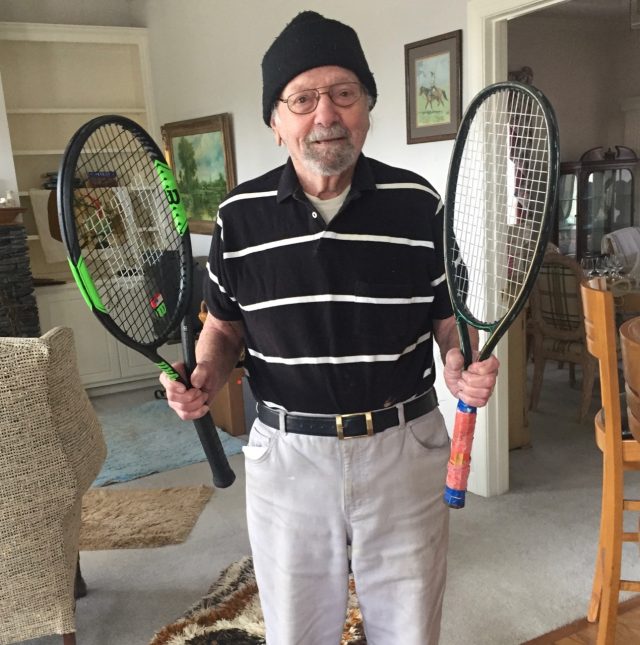 A salute to one of our oldest living ALTA members

Herman Tannenbaum was born on July 26, 1922 in Brooklyn, New York during times when tennis was quite a luxury. This was the same year a new tennis stadium that you might have heard of, Centre Court at Wimbledon, first opened. Tannenbaum’s curiosity with the sport began in his late teens, when he started following tennis professional Vic Seixas, who at that time (from the 1940s through the 1960s), was “the face of American tennis.” It was Seixas’ Jewish heritage, mental and physical discipline, tenacity, and service in the Army that deeply inspired Tannenbaum. However, playing the sport would have to wait since Tannenbaum was called up to serve in the war in 1943 when he was only 21 years old.

He became an Army B-24 Bomber navigator, which meant sitting behind the co-pilot and telling him where to go as well as explaining how much fuel was left and what was expected from the weather. He served 3 ½ years of combat duty, executing low-altitude bombings overseas, mostly in China. After the war ended, Tannenbaum arrived safely home to Brooklyn where a big welcome party lovingly organized by his sister was waiting for him. It was on this day that he met the true love of his life, Lorraine Pine.

He and Lorraine married on Mar. 9, 1947. They later had two sons, and moved to Miami, Florida in 1957. There, Tannenbaum and his father-in-law started a business called Smiling Jacks Auto Parts, and this is when Tannenbaum, in his mid-forties, decided it was finally time to start playing tennis. A few friends were playing at Flamingo Beach, and the North Miami Beach Tennis Club had clay courts where residents could purchase an annual season pass for $400 (about $836 in today’s dollars). To him, this seemed like a lot of money, but Tannenbaum wanted to play so he joined a team. Over the years, he developed his game on these well-known clay courts that sit next to The Ancient Spanish Monastery. Eventually, it became the notable place where Nick Bollettieri started his famed tennis coaching career.

Fast forward to the year 2000, and the Tannenbaums had moved to Atlanta and bought a house in Bridle Ridge, a fairly new subdivision with tennis courts in Forsyth County. It took a few years to get familiar with the neighborhood. In 2004, at the age of 77, an age when playing competitive tennis winds down for most, Tannenbaum joined his first ALTA team. It was a C5 mixed doubles team, captained by Ashley Cavender. “He was my tennis partner for several years and people were always in awe of him,” Cavender said. “Herman does not like to lose, and he never makes any excuses.” She added that first and foremost, he is an unbelievable sportsman, always supportive, helpful and positive, even to their opponents. She says the humanity of him towards every human being is remarkable. “When you talk to him, you know you matter. His mind is so sharp. It’s true that age is just a number.”

Tannenbaum went on to join a men’s league team and became a force to reckon with. In 2011, he won his first and only ALTA Men’s League City Championship. “We nicknamed him ‘the Hermanator’ because of his strength and resilience on and off the court,” said his teammate Mark Fuglsang. “He embraces his age and makes the most of every day. He is a true old-school WWII gentleman.”

Tannenbaum recalls a match with teammate Brent Morgan in which they won in straight sets. He overheard the opponents as they exited the courts saying, “that old guy with the beard … he’s pretty good.” Tannenbaum never revealed to them that he was 90 years old because he thought they would have passed out!

ALTA is commonly referred to as a family. This was especially true when Tannenbaum’s friends from ALTA rallied around him when his wife’s health began to decline. She passed away in 2011. The Tannenbaums were married for an amazing 64 years, and Lorraine was the center of his life. His teammates jumped into action, taking him meals and running errands, doing whatever it took to help Herman through that extremely difficult time. They have truly been his lifeline. Tannenbaum recalls how all of his teammates came to his wife’s funeral. He was shocked how the room was filled his tennis friends and neighbors paying their respects.

In the years following, these same people organized a surprise 95th birthday party at the neighborhood clubhouse. The room was packed with adults and children from the neighborhood, along with his sons and their families who came from out of town to pay tribute to a man who means so much to so many people. Teammate Mike Matthews decided to something extraordinary and organized a special day for Tannenbaum. “I asked Herman if he ever had flown on a B-17 Bomber. He said ‘No, only on a B-24.’ I asked would he go up with me if I coordinated,” Matthews said. “In true Herman fashion, he smiled and replied, ‘Hell yeah, I’ll go!’” On the day of the flight, he told Tannenbaum he did not have to go up if he did not feel like it. Tannenbaum’s response resonated with Matthews, even to this day. “Herman said if he had committed to something, he would not let his brothers down. True to his words, he went flying that day,” Matthews recalled.

Even though Tannenbaum had to reluctantly retire from playing tennis at the ripe old age of 96 in 2018, his passion and love of the sport and his teams continues. He even kept up his ALTA membership through 2020. Every weekend, you will find him up at the Bridle Ridge courts cheering on his teammates. Fuglsang shares, “No matter what the weather — rain, shine, or freezing cold — we can count on Herman being in the pavilion. He is always upbeat and encouraging, especially if you lose. He always lets you know he believes in you.” Teammate Shawn Maschmeier adds, “Herman has that special ability to see the positive side of everything. Be it politics, the virus, or the weather.”

Tannenbaum reflects, “Tennis has made me aware of friendship and respect, and has contributed to me being here and enjoying life.” Marilyn Cameron, who played Herman’s final tennis match with him before he retired says, “Herman is the epitome of the statement that tennis is a life sport. He never gives up, he just keeps going, and he is a blessing to everyone who knows him.”