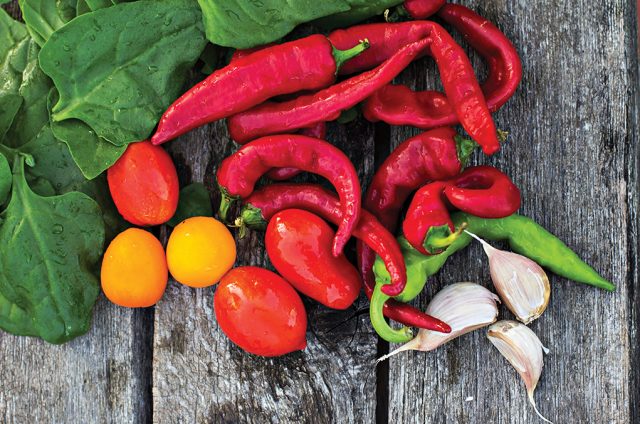 The winter months are notorious for bringing on slumps in motivation. When the days are darker, it’s easy for 4 p.m. to feel like 8 p.m., leaving you to wonder where your day has gone and if you really need to keep active for several more hours. The lack of prolonged sunlight and colder temperatures are enough to make even the most dedicated tennis player want to retreat into hibernation. While activity is a great motivator, there’s more you can do to aid your concentration and energy, and it comes in a controllable, delicious form: food.

The old adage “you are what you eat” is not completely misguided; the vitamins and minerals in certain foods, specifically B vitamins, healthy fats, low-glycemic index carbohydrates and antioxidants, can do wonders for your concentration and energy levels. The key is not only to diversify your diet in order to keep your nutrient levels adequate, but also to focus on adding certain nutrients that will work with you when you find you’re least motivated.

Sustainable energy is a big one: Coming down from the holidays, which are well known for traditional, high-glycemic carbohydrate foods (think mashed potatoes, stuffing and desserts), it’s likely your body is craving more raw, clean food. Most fruits and vegetables are considered low-glycemic, which, in short, means they will offer a sustainable energy boost rather than a quick burst followed by a blood sugar crash (which is the case with refined sugars and most grains).

In addition to consuming more of the “right” carbs, certain amino acids found in leaner proteins, antioxidants and dopamine stimulators combine to help you feel your best all year long. Here’s a list of some foods to incorporate into your daily routine that can help you get up and go when the urge to hibernate is greatest.

Omega-3 Fatty Acids
Oily fish, such as salmon, trout, mackerel and sardines, as well as flax seeds and walnuts, have been proven to improve concentration and motivation via a boost in cognitive function. Helping the brain’s ability to think and process is key, while their anti-inflammatory properties keep cells functioning at optimal levels. Studies have shown that omega 3s found in fish oil have shown to help with depression as well as ADHD. According to the National Institutes of Health, omega-3 fatty acids can reduce joint tenderness and need for corticosteroid drugs in rheumatoid arthritis, which can be beneficial in helping you get out and play when the weather is cold and harsh on the body. Good sources of ALA omega 3s include leafy green vegetables, nuts and vegetable oils, while EPA and DHA omega 3s are best found in fish and organ meats.

Flavanols and Other Polyphenols
The flavonols in dark chocolate — not to mention the mental boost from the caffeine — have been shown to increase blood flow to the brain, in turn improving the ability to concentrate. Both dark chocolate and green tea contain antioxidants called polyphenols that aid brain function and decrease cell death. These work to reduce free radicals in the bloodstream, allowing more oxygen to flow to the brain and heart — a must for getting the most out of physical activity and concentration.

A 2012 study by the National Institutes of Health found that polyphenols possess special properties that battle oxidative stress and stimulate molecules that aid in synaptic plasticity, a process that underlies cognitive function. When it comes to motivation and concentration, these foods high in polyphenols are on your side: cloves, peppermint, cocoa powder, dark chocolate, flaxseed meal, chestnut seeds, elderberries, blueberries, black currants, capers, black olives, hazelnuts, pecans and much more.

Foods High in B Vitamins
B is the energy vitamin, and everything from B6 to B12 is essential to proper bodily functioning, down to the nervous system level. B6 and B12, in particular, protect the brain from nerve damage that can be caused by a chemical called homocysteine involved in the development of dementia and Alzheimer’s. To get your daily dose, turn to fish, red meat, whole grains, eggs, nuts and seaweed.

Foods High in Fiber
Do you feel more motivated to move and be active when you’re uncomfortable and bloated or when you’re feeling lean and clean? Foods high in fiber have shown to increase motivation as they help sustain a regular level of energy and keep blood sugars stable. When the brain and organs are receiving enough energy to function optimally, you feel your best and aren’t weighed down by drowsiness or heaviness. Turn to vegetables, whole grains, fruits, beans and legumes, all of which have a low-glycemic index to prevent your blood sugar from spiking and falling dramatically.

Foods that Boost Dopamine Levels
Dopamine is a feel-good chemical produced in your brain, but certain foods can trigger a boost. Tyrosine, contained in many common foods, is what dopamine is synthesized from, and folate also helps increase dopamine production. Some foods high in tyrosine are spirulina, duck, edamame, fava beans, mustard greens, eggs, bananas, strawberries and blueberries, while leafy greens like kale, broccoli, cauliflower, lentils, black beans, chickpeas and papaya are all rich sources of folate.

Beyond tyrosine, studies have shown that blueberries improve your ability to perform tasks requiring lots of focus. It’s believed that their high-antioxidant content takes care of free radicals in the body, reducing inflammation. This helps increase blood and oxygen flow to the brain, while their low-glycemic index allows for sustainable energy.

Betaine and Quercitin
The amino acid betaine works as a sort of antidepressant, not only helping dopamine production but also giving an added morale boost. Betaine is found in high quantities in red beets, wheat bran, quinoa, spinach, amaranth, bulgur wheat, sweet potato, turkey breast, beef and veal. Betaine has also shown to boost muscle protein synthesis in the body, helping you repair more efficiently after exercise so you can feel your best and be physically ready for the next round on the courts. The antioxidant quercitin, found in apples, onions, citrus fruits, red wine and dark berries, has been shown to help prevent neurodegenerative diseases as well as stimulate dopamine. In addition to being a great motivator, quercitin has shown to support normal respiratory and cardiovascular health because of its antioxidant properties helping fight against free radicals. It also suppresses the enzyme necessary for cortisol release, helping you fight stress and repair muscles more effectively.

This winter, be sure to diversify your diet with foods that will work for you and keep your nutrient levels optimal. With proper nutrition, your body will have all the resources it needs to feel more awake, more active and ready for action despite the shorter days and colder temperatures. The final step? Gather your teammates, get out and play.