It was truly a twist of fate and a love of tennis that brought Brett Bedwell and Emily Morrow together. They met last year while playing in the Red Hare tennis league, having signed up separately but were paired together. That would turn out to be a perfect match in so many ways.

Following a few dates, the pair decided to become ALTA partners. “That’s where the real competition is at,” says Bedwell, who grew up near Leafmore Creek Park Club in the North Decatur area. In addition to a love of competition, this mixed doubles team has a lot in common: He and Morrow both play on a AA3 mixed team out of Bitsy Grant. He played tennis at Lakeside High School while she played at Darlington Academy in Rome. The UGA graduates both have red hair, and they recently opened a business called Red Headed Real Estate.

Having so many things in common, Bedwell decided it was time to make this match official. In April, he went to pick up the ring at America’s Mart. Because of COVID-19, they were not allowed to come inside, so the folks at Harland Jewelers brought it out curbside. One weekend, Morrow’s parents visited the couple’s house, which they were renovating, and they decided to have a picnic in the backyard. Bedwell’s mother also was there, and she took Morrow to “look at the paint” in the front of the house. “I took the opportunity to get down on one knee and asked both of her parents for permission for Emily’s hand in marriage. They both cried like babies (and of course, said yes!),” says Bedwell.

The idea for the tennis ball ring box came straight from his mom, Vicki, and his sister, Magen Giles, who also are avid tennis players. When it came time for the proposal in May, Bedwell hired a photographer and told Morrow that his mom wanted to take some pictures on the court at Leafmore for a Mother’s Day present. Bedwell says Morrow was 90-percent sure the proposal was coming, but the funny part was he spent about 15 minutes warming her up and took the opportunity when he hit a ball into the net to come walk around the other side of the court.

“Babe, is there something wrong with this ball,” he asked. This was when she was 100-percent sure it was happening. “I got down on one knee, and I popped the question with tennis racquet in hand still,” Bedwell recalled. Her initial reaction to the proposal was “OMG” and she couldn’t stop looking at the ring. Bedwell had several friends there, who popped the champagne bottles and congratulated the two red heads. They then traveled to Vicki’s house, and Morrow had hoped her parents could have been there. So that was the final surprise; little did she know that her parents had driven from Rome for the celebration.

“She said it was the best day of her entire life,” says Bedwell. He says they hope to be married in early 2022 and look forward to a fun engagement and fun wedding, which might even be on a tennis court. Ultimately, Bedwell says they want to build their business so they can have extra time to spend with their kids., “so we can teach them the best game there is…tennis!” 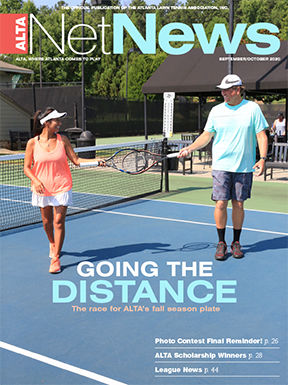