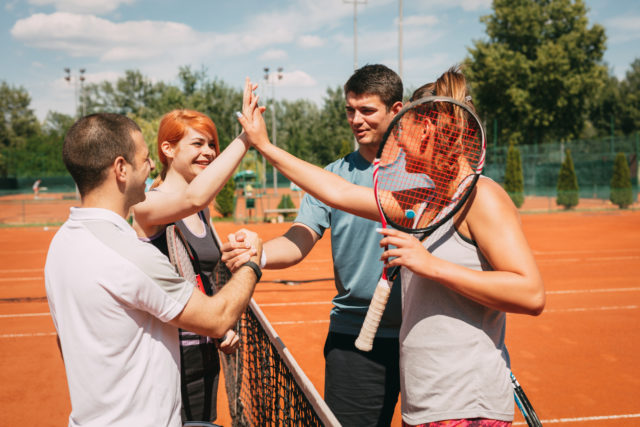 From my New York apartment, I have the greatest tennis view. I’m able to see the various crews preparing for the 2019 US Open. It is really cool to see the process and progress. Just like the organizers, the most elite tennis players in the world are preparing for the 2019 US Open. How they prepare to compete is something you can incorporate into your preparation for your tennis matches. Sure, you may not be playing for prize money, but the passion and objectives are the same — to win!

I always use long- and short-term goals to achieve my desired outcome. When I played professionally, this always was straight-forward. Each overall goal was what I wanted to see after the season was over. I always was shooting for number one in the world. I knew I had to win at least two grand slams and sprinkle in a couple of ATP 1,000 titles to be in the mix for the ATP Tour year-end top ranking.

So now for the tough part, short-term goal planning. I liked to use two-week segments to stay the course and re-evaluate where I was at that point. I played a lot of tennis back in the day. Most ATP seasons, I was playing 35 to 45 weeks per year. I was a player who needed to play constantly to feel the game and its rhythms. I never needed much time off the ATP Tour. I knew the very best training for me was around the locker rooms at the tournaments.

How often do you venture outside of your core group of tennis buddies? One of the things I felt I did well was actively find new pros with whom to train. On the tour today, the players stay close to their inner circles of players with whom they grew up or with their coaches, trainers, etc. Those small armies were not around as much when I played, but the money is so much bigger now for more players that it’s more common. No matter what, only players understand players. Unless you were out there down 15-30, 4-5 in the final set and hitting a second serve to stay in the match for your financial life, you have no idea what it takes.

There have been loads of parent/coaches or minor-league pro players who coach great players, but it’s easy to coach an Agassi or Serena. Those stars have such massive separation of talent from the rest of the galaxy that as long as they have the right head space, they will win. I was with Agassi during our U.S. Davis Cup years in 1991 and 1992. The guy could make the ball “talk” and at times even “hurt.” Ok, so we are not Agassi or Serena, but we can set up winning formulas for our development.

Setting up games and practice sessions came easy to me. I would track down various styles of play that would challenge me. My practice focus and intensity equaled my match heart rate, so every opportunity built up my game. I tried to play as many sets as possible, but players didn’t want to do that all the time. I learned their training approaches by being on the court with them. For example, Jim Courier was a grinder, and if you were with him on the practice court, you were only going to go one session that day because he used you like a heavy-weight bag, to borrow a boxing metaphor. Pete Sampras was much easier and just liked to find a groove to find his ideal balance. He served so big that it wasn’t worth hitting his massive serve all the time, so we would play sets and work on his second serves. Agassi was like a sharp shooter looking to hit a few specific targets, and he was done. Sometimes, he wouldn’t take serves or volleys. I warmed up Steffi Graf before the 1992 Wimbledon final, and she was all business — nothing but focused on locking into her best tennis.

Countless practice opportunities that I called learning sessions constantly shaped the player I would become. Did you notice Federer playing the clay court season this year? He knows that those important matches build his game that didn’t happen when he skipped the clay season the year before. So, go out and look for some new sparring partners to build your game. Short, two-week goal approaches can help you change an approach if you are not improving the way you want.