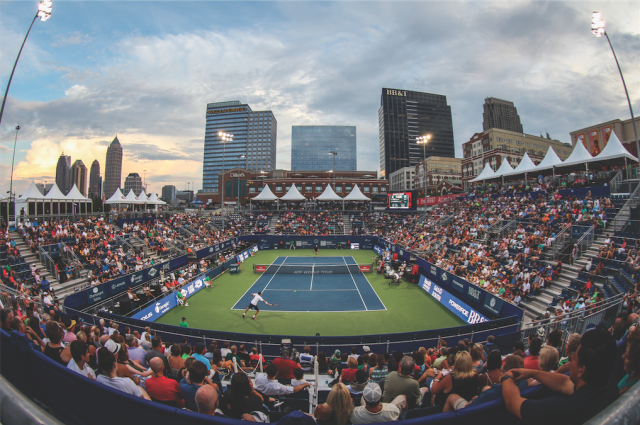 The 2017 BB&T Atlanta Open is right around the corner and fans of all ages have to “Be There!” Get your tickets now.

This year will provide arguably the most loaded field in tournament history: American No. 1 Jack Sock, three-time champion John Isner, defending champion and rising star Nick Kyrgios and the greatest doubles team of all-time, the Bryan brothers, will all enter the week looking to hoist the trophy. As if that men’s tennis star power wasn’t enough, Sunday, July 23, will see American legend Venus Williams battle Genie Bouchard in a special ladies’ exhibition at 7 p.m.

Williams is having a resurgent year at age 37, reaching the finals of the Australian Open and the semifinals of the Miami Open. Bouchard, who is featured in Sports Illustrated’s 2017 swimsuit issue, picked up wins over former World No. 1 Maria Sharapova and current No. 1 Angie Kerber in May in Madrid.

“We’ve always said that our vision is to be a ‘mini US Open’ here in Atlanta,” says Tournament Director Eddie Gonzalez. “With our addition of a former US Open champion in Venus Williams, it’s really exciting to have the great American champion make her first trip to Atlanta in over 15 years. Venus is an inspiration to tennis fans and players around the world. Genie Bouchard is the perfect opponent for Venus, and Atlanta tennis fans will love the professional brand of women’s tennis on display.”

Fans who were unable to snag a ticket to the ladies’ exhibition will be able to entertain themselves by watching a week’s worth of top professional men’s tennis. Jack Sock comes to Atlantic Station as one of the hottest players in the world, capturing a pair of titles in Auckland and Delray Beach. He’ll be joined by good friend and defending champion Nick Kyrgios, who will look to make it back-to-back title runs in Atlanta. In their way will be John Isner. The three-time champion and former University of Georgia Bulldog is the most successful player in the history of the event and will not be easily defeated.

Joining the headliners will be another crop of talented young Americans. Reilly Opelka, who made a surprising semifinal run in 2016, will return along with Ryan Harrison, who won the Memphis Open in February, and up-and-comer Frances Tiafoe, who is having a career-best year.

Another youngster, Georgia Tech’s Chris Eubanks, was awarded a wild card into the singles main draw after getting through the qualifying rounds last year. The Yellow Jacket led his team with a 28-5 singles record during the 2017 season, helping the team reach a Top 20 national ranking. Eubanks will star on “College Night” on Tuesday, July 25.

“Playing in the BB&T Atlanta Open is something I will remember for the rest of my life,” Eubanks says.

The collegiate star is no stranger to the pro game, having played six professional events in 2016. Eubanks gives a nod to the full-time ATP players, acknowledging the difference between them and the average NCAA student-athlete.

“They fight for every point. That’s why they are professionals and have high ATP world rankings,” Eubanks says.

The 2017 edition of the BB&T Atlanta Open will provide fans with loads of entertainment outside of the awesome tennis action. The Family Zone presented by Wilson will be open all week on the tournament grounds, which will also host a concert on Wednesday and a fireworks show on Friday. Additionally, this year the tournament welcomes a new on-court emcee, popular local radio personality and tennis fan Jason Bailey, who is better known as the host of the top-rated “Bailey and Southside” morning show on Rock 100.5.

The Opening Ceremonies and ALTA Night will be Monday, July 24. ALTA members will receive a 25 percent discount for Monday’s tickets using the promo code ALTABBTAO, as well as 15 percent off tickets to any other session throughout the tournament, at bbtatlantaopen.com.