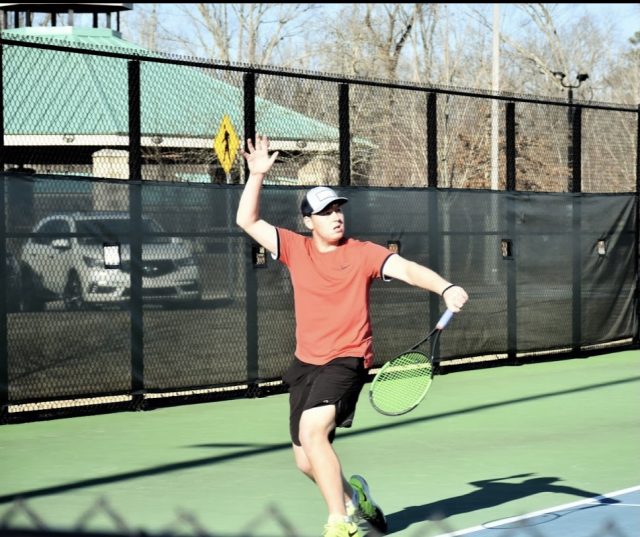 We say goodbye to seven players who are graduating high school, moving up, and moving on as they complete their tenure on the ALTA Junior Challenge Ladder. We have enjoyed watching these players develop their skills on and off the court. We wish them the best in college and beyond. 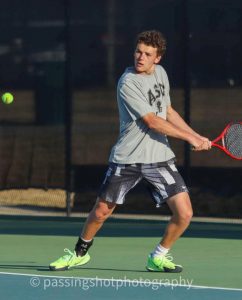 Hirshberg started playing tennis at just 8 years old. He played on junior ALTA teams out of Country Club of the South and Medlock Bridge from ages 10 to 15. Following his training at The Standard Club in Johns Creek, his mom helped him on and off the tennis court by guiding him in the right direction to become a college athlete. “I would advise a younger player to focus a lot on doubles and play at every opportunity because it can really add to your singles game,” says Hirschberg.

He says tennis gave him an opportunity to meet friends, as well as the skills that he will need to succeed for the rest of his life. After high school, Hirshberg will be attending Washington and Lee University where he will continue his tennis career. His best memories of the JCL include all of the ladder events. “It was fun to come together and play some tennis in a relaxed environment,” he said. 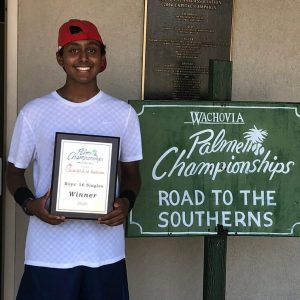 Kulkarni first picked up a racquet at the young age of 5. Recently, he had the opportunity to train at Academia Sanchez-Casal (ASC) with Lifetime Athletic and Fitness in Peachtree Corners. He also played on the JCL in 2020. Kulkarni lives in Greenville, South Carolina and had previously trained there. He played all of his home matches at Lifetime and travelled to the UTA Academy and Riverside Club to compete. He says his family has always supported him throughout his tennis journey.

“My friends and other family also have constantly encouraged me throughout high school to follow my passion,” says Kulkarni. He is forever grateful to his coaches for the time and effort they have given to help him achieve his goals. “My coaches at ASC Atlanta worked tirelessly to help me improve,” he said.

Kulkarni’s advice for younger players is to never give up on your dreams. He believes it’s vital to focus on improving every day to be successful. He says tennis has given him a great opportunity to exercise and have fun. “The sport has also taught me invaluable life lessons and has given me skills I will utilize the rest of my life,” he said. Kulkarni is taking a gap year, but plans to attend a four-year college and play tennis. He intends to major in either biomedical engineering or pre-med. He says his best memory of the JCL was playing in the Boys/Girls Doubles Round Robin at Riverside Club. “It was a lot of fun meeting and playing with different players,” he recalled. 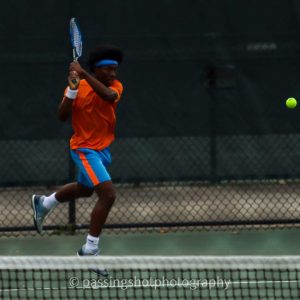 Starting at the age of 5, Lawrence played tennis out of Peachtree City. He has been on the ALTA Junior Challenge Ladder for five years and trains with Calin Constanceanu at North Atlanta Tennis Academy. He says his father is his biggest influence. “I was inspired to play tennis because of him, and he still helps me improve my game today,” says Lawrence.

His advice for younger players is to work as hard as you can. “You never know when you will get a great opportunity, so you have to work hard to be ready for it,” Lawrence advises. Tennis also has helped him maintain a healthy lifestyle. He says training on the court for hours a day makes it easy to stay in shape. Lawrence will attend Alabama A&M to pursue a career in film and television. He held the top spot on the ladder for a period of time and says that is his best memory of the JCL. 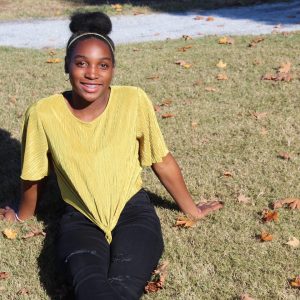 Tennis became a part of Oliver’s life at the age of 6, as she began playing on an ALTA team at the Southland Golf and Country Club. She trains at Burdette Tennis Center. Oliver gives credit to her coaches, family, and friends who helped her become a better athlete, which she says led to her becoming a better student. “I would tell a younger player to play with a passion,” she says. “If you’re passionate about tennis, you’ll also be a committed and determined tennis player.”

Tennis has allowed Oliver the opportunity to travel and to develop a disciplined mentality. She will be attending Spelman College to study political science with a Spanish minor. After completing her undergraduate degree, she plans to pursue a law degree with a focus on international law. Her best memory of the JCL is meeting everyone at the end-of-the-season celebration and being awarded the JCL sportsmanship award. 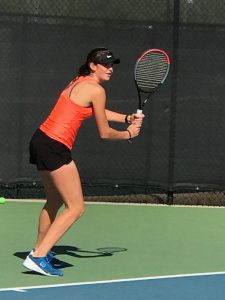 Sharabura started playing tennis when she was 5, and she has played on the ALTA Junior Challenge Ladder for four years. She trains at UTA Blackburn. Sharabura says her coach, Noel Wadawu, has had a great influence on her, both on and off the tennis court. “He has coached me to become good at tennis, but he has also taught me a good work ethic that translates to the rest of my life,” says Sharabura.

She also gives credit to her parents who have helped her off the court to become a better person, and says her friends inspire her to keep playing. “Everyone I mentioned also supports me, as I continue to play. That has been great,” Sharabura said. Her advice for younger players is that “it’s cool to try hard.” She says tennis has added so much to her life. “It has kept me physically healthy and given me a mental escape sometimes from other parts of my life. It also has helped me create a ton of friends for whom I am so grateful,” she says.

Sharabura is planning to attend the Georgia Institute of Technology as a biology major and will be playing tennis for the Yellow Jackets. Her best memory of the JCL is the end-of-year banquet in 2019. “A lot of my friends were there, and it was a great event to bond [with them] and see everyone together.” 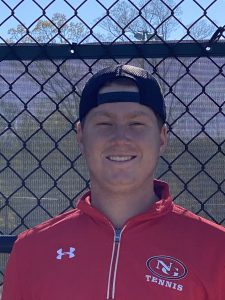 Starting at a young age, Sloan picked up a racquet and later began playing competitively by age 9. Over the years, he has competed in ALTA league matches out of his neighborhood and on the Junior Challenge Ladder. He practices with the ASC program at Lifetime Athletic Club. “I am beyond grateful for all the individuals who have influenced me throughout my junior career,” he says. “My parents and coaches have always supported me and helped me to be the best person and athlete I can be.”

Sloan says if he could do it all again, he would really focus on his development and understanding of who he is on and off the tennis court at a younger age. “I encourage the younger players to enjoy the experience and have fun at a young age, but they should also take their training very seriously,” he said.

He credits tennis as being the reason he has become a more disciplined and hard-working person and says it has given him the opportunity to meet many people with whom he will stay in touch long after his college life ends. Sloan’s plans for college include earning a degree in finance, and he will be playing tennis for the Georgia Gwinnett College Grizzlies in the fall. His best memory of the JCL is all of the fun events that are put together for the players. “The round robins, banquets, and socials were super fun and always my favorite tennis events throughout the year,” he said. 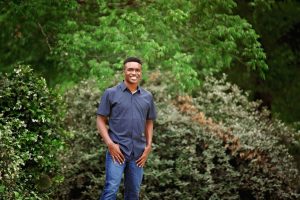 Winfrey was introduced to tennis at the age of 12 while at a summer camp. Before that, he was really into baseball. Two coaches who helped grow his game were Scott Ross on the courts of Trammell Crow Park in Southwest Atlanta and D.C. Herendeen from Hunter Park in Douglasville and West Georgia Tennis Club in Villa Rica. “Coach Scott taught me to be confident but humble, to work hard (as he puts it ‘grind it out’), and never give up,” Winfrey said. “Coach D.C. is a doubles maestro! He taught me the finesse of tennis, which helped me play smart tennis.”

In his tennis journey, Winfrey played ALTA Junior tennis, twice making it to the City Finals in 14U. While playing varsity tennis at Harvester Christian Academy, he won the Georgia Independent Christian Athletic Association’s State Individual Title as a freshman. He joined the JCL in 2016 and played his first match against Freddie Lawrence, and interestingly enough, he played the last match of his JCL career against Lawrence in the 2020 season. “The JCL has afforded me the opportunity to compete against top players, which has greatly improved my game, and I love to see how the ladder has grown and that it is more diverse with players coming from all over metro Atlanta,” says Winfrey.

His advice to younger players is to “focus on competing hard and set goals to improve your game with each match,” he says. “Have fun, keep practicing, and play matches to work on your consistency; the results will show.” Winfrey will attend Kennesaw State University in the fall of 2021 where he plans to major in psychology and hopes to play club tennis. As he closes out his time as a junior tennis player on the JCL, he is looking forward to playing in ALTA as an adult and staying connected to tennis. “I would also like to thank Coach Clifford Malivert, director at Sweetwater Tennis Center in Austell, for his mentorship and helping me love tennis again,” Winfrey said.