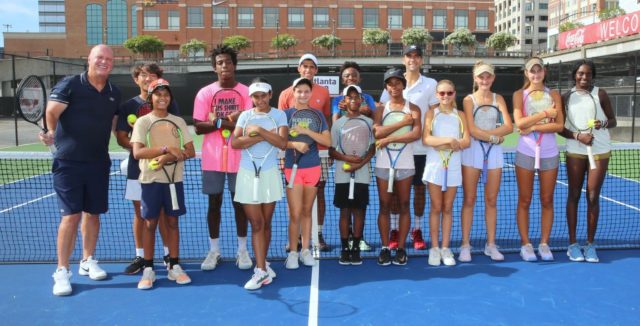 The 43rd ALTA Junior Challenge Ladder (JCL) season is here! The season began this year on August 26 with 136 junior players playing competitive matches throughout Atlanta. The goal of the 14-week season is to play tennis in a fun and low-pressure environment. The best part of the JCL is meeting new tennis friends across our great city. During the season, JCL players will compete in more than 1,000 combined matches.

This year’s season started with a kickoff event on August 28 at Sandy Springs Tennis Center. Four more events are planned for this year’s ladder players, including a top-10 player event. One of the best parts about the ladder is the swag. Last season, every JCL player got an ALTA hoodie. Players also earn awards for three-in-a-row wins, sportsmanship, and ladder player of the year.

The ladder is bolstered by parents who schedule and drive their players to their matches. The glue to our ladder season is our incredible volunteers, the ladder managers. Ladder managers are the main ingredient to a successful ladder season. They get the calls, emails, and text messages from the parents and players. Parents put their trust in our capable ladder managers to make sure it’s a smooth, safe, and fun ladder season.

This is my first year as VP of the Junior Challenge Ladder. I’ve been involved with the ladder for five years. Both of my boys have played (Harold and Kellen Simmons), and during the last two years, I have served as a ladder manager. I’m always impressed by the organization of the ladder and the skill level of the players. We have really strong players and incredible ladder managers, and I know this is going to be an unforgettable season. The JCL serves as a big steppingstone for junior tennis and helps support the growth of tennis in Atlanta. The majority of players on the ladder go on to play college tennis. Look for the final standings and a full recap of this year’s season in the 2023 March issue of Net News.