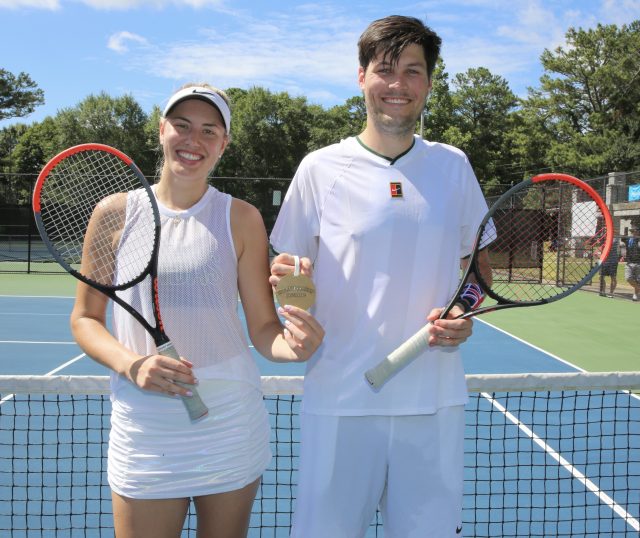 2020 was by far one of the most challenging years that many of us have endured as it impacted so many aspects of our lives. The effects have been so far-reaching, and yet, we all had to find a way to adapt and get through a time we hope we will never encounter again. Many people turned to outdoor physical activity, and luckily, tennis remained one of the safest sports in which people could still participate. ALTA successfully survived and is once again thriving with leagues for all ages and levels. Along with that is a key component of ALTA: good sportsmanship. We love to hear from our members when they encounter extraordinary examples of good sportsmanship while either playing or organizing their matches.

Please reach out to your coordinator or a league vice president if you wish to nominate an ALTA member for a good sportsmanship award. You also can find a nomination form at altatennis.org>ALTA Documents>Sportsmanship Award> Nomination Form.

We were deciding whether we would play a third-set tiebreak, and because it was a make-up match, we were playing on a Sunday at 10:00 a.m. I had family coming over that afternoon and I hadn’t even realized we could play a full third set. Mary and Jean wanted to play a full third set if needed, but when they heard I had family coming over, they agreed to a tiebreak, which we ended up playing and we won. I was so grateful to them for doing that, just because I had a time restraint. They could have forced the full third set, which probably would have affected my game as I would be worrying about getting home. It was very nice of them to accommodate me, and for them, they are worthy of this sportsmanship award nomination.

I made the silliest of mistakes. As I started typing in the facility for my match in the Waze App, I selected the incorrect “Thorn: neighborhood. I arrived at the incorrect facility 15 minutes early and of course no one was there. Why? Because I was supposed to be at Thornhill, which was about 30 minutes away. Waze then had me arriving at the correct facility past the default time. But in the spirit of ALTA, they agreed to wait until I arrived. As a second-place team, they could have easily taken the point for my line 2 as well as line 3. As you know, the object is to play tennis, not to take points by default. Thanks to these players and the captain!

I am writing to nominate Sherri Brown and Lesley Poole from the Thursday Women’s Morning View Team. I captain the Princeton Square Women’s Team and we not only had to beat their team in the final match of the regular season to win the division, but again in the third round of the playoffs to advance to the City Finals. One of my opponents in both matches was Sherri, and I found her to be nothing but fair and courteous. In addition, she was so understanding of our overzealous behavior in winning and more than graceful in her loss. Furthermore, both she and Lesley reached out the day of the City Finals to wish me and my team good luck. As you know, you don’t always see this in tennis, so to me, Sherri and Lesley both exemplify the ideals of sportsmanship. I believe we could all take a lesson from these two ladies!

I’d be remiss to not nominate Cindi and Kristin for the Good Sportsmanship Award. Whenever I think of the match in which they beat my partner and me, it’s impossible not to smile. They were cordial and respectful throughout both sets. Even when we began showing our frustration from missed opportunities, they were exceedingly kind and sportsmanlike in offering gentle words of encouragement. If one must lose a match, being defeated by such gracious and upbeat ladies is a wonderful way to lose.

Kate is young (24) and a relatively new player, but a lifelong competitive athlete. During the match, my partner hit a first serve wide and after her partner called the ball out, Kate said it was our point. We all looked at her a bit astonished because the serve was clearly out. She said the ball had grazed her body. None of us had seen it or heard it, but she insisted the ball had touched her. Kate exhibited great sportsmanship throughout the match, was always polite and friendly, and made good line calls. She exhibited the behaviors we would like to see in a new player to a team.