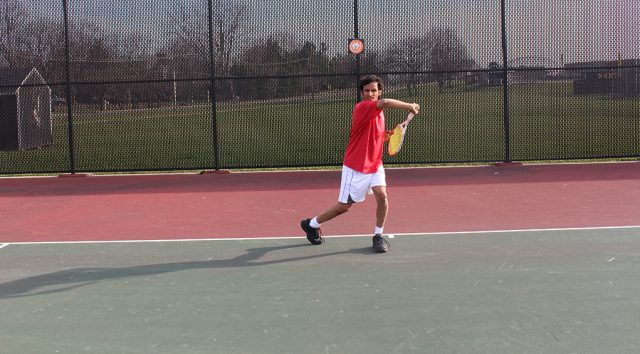 “Hit through the middle, hit through the middle!” My mixed doubles partner kept offering this simple advice on the court one day. Because he’s smart (and because he’s my boss), I followed his directions. Lo and behold, it worked! We began getting point after point using this strategy. All of a sudden, we won the set 6-0, after losing the first set 6-2.

Did you realize the net is shorter in the middle? It’s 3.5 feet high at the post, but 3 feet high at the center. This can work to your advantage. When hitting through the middle of the net, you have more room to work with and balls hit through the middle have an easier chance of going in. You don’t have to worry about just grazing the net, a common problem with hitting down the line. Obviously, any strategy to improve your margin is worth considering.

Another reason to consider moving to the middle: When coaching/teaching doubles I am often asked how to decide who should address the returning ball? Logically, the partner ready for a forehand should address it. But what happens when both players are in forehand position? Whose ball is it? In the thick of play, there’s no time to plan this one. Hitting down the middle creates confusion and betters your chances of finishing the point.

But, how do you respond when your opponent hits down the middle? I say, “Whoever gets to it first!” It’s a smart shot to make, but you need to make sure to be smart when it’s returned.

In my opinion, the middle is your ticket to winning the point, or at least an opportunity to not miss out wide. Keep in mind that hitting down the middle opens up the court. You now have the opportunity for more angles and some great rallies.

Now you know my favorite new doubles strategy. The next time you’re on the court, think about those points. Now you have a game plan for winning your next match!