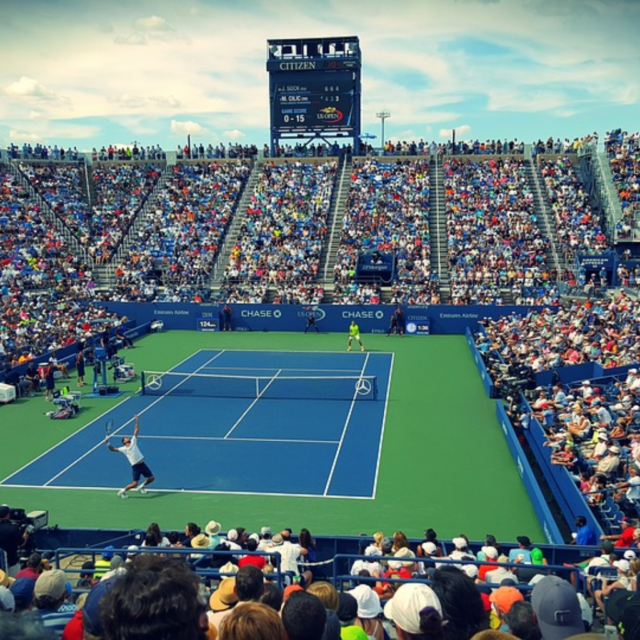 In 1969, on an overcast day at the US Open final, Rod Laver was slipping and sliding all over the court while losing to fellow Aussie Tony Roche. In order to get a grip on the court, he changed into his spikes for more traction on the grass, which in turn allowed him to come back to win the title.

Yes, you read that correctly. Many people don’t know that the US Open over its long history was not always played on the hard courts that have become synonymous with Flushing Meadows today. Before switching to the familiar hard courts, the US Open had been played on grass and clay, making it the only major to be played on three different surfaces. This is one of the many factors that make the US Open as unique as it is.

Originally starting in Newport, Rhode Island, the US Open was played on grass through the 1974 season. At the time, the US Open was one of three grand slams played on grass, along with Wimbledon and the Australian Open. Going against tradition, US Open officials implemented a fifth-set tiebreaker (beginning in 1970) to avoid marathon matches and, to this day, is the only grand slam to do so. In 1973, the US Open became the first major to award equal prize money to male and female players. Similar to the signature grass tournament of Wimbledon, all-white attire was required for all players until 1972. But the US Open would become the first major to allow players to wear any color of their choosing. And by 1974, tournament directors decided to switch to a clay playing surface and move the US Open to Forrest Hills.

In 1975, the tournament switched to Har-Tru, which is a green clay that is a little bit faster than regular clay and not as soft. That same year, tournament directors introduced night session play. This would allow more fans to attend and to watch from home during prime-time hours. This would become one of the most popular features of the US Open.

Over the three-year span that the Open was played on clay, American Chris Evert was the most dominant woman on the surface, winning the title all three times. Another American, Jimmy Connors, would find success on the Har-Tru as well, making the finals all three years and defeating clay court legend Björn Borg in 1976. In 1978, in order to accommodate the rapid growth of the sport, US Open officials moved from Forrest Hills to Flushing Meadows and for the second and last time switched surfaces, going from clay to hard courts.

The US Open found its permanent home when it made the move to Flushing Meadows. In 1997, Arthur Ashe Stadium was opened to accommodate larger crowds, and in 2006 the site would be named after tennis icon Billie Jean King. The hard courts have remained the same, with the only major change happening in 2005 when the inside of the courts was painted blue. This gave the courts a better look and was more viewer friendly for TV audiences, allowing people at home to be able to see the ball more clearly.

As you watch this year’s Open, take a pause to remember all of the history that has happened during this U.S. major. The US Open has been the pioneer of many improvements to the sport of tennis. It has been played on three different surfaces and at four locations, ultimately finding the best ones with the hard courts of the Billie Jean King Tennis Center being brightened by the overhead lights for many years to come.