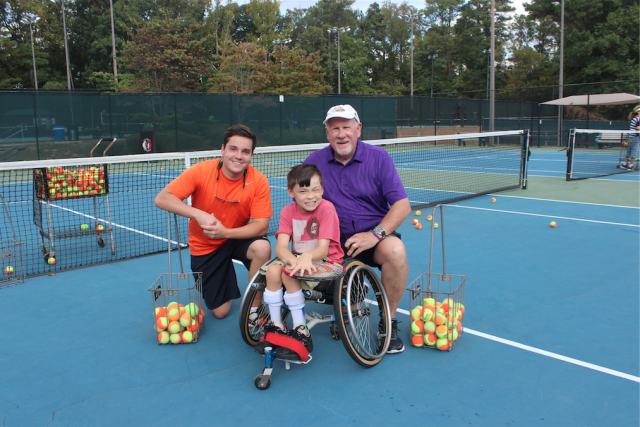 This could be a story about what a dedicated volunteer Ron Walker is. After all, he has directed wheelchair clinics at Blackburn Tennis Center every spring and fall for almost 30 years. But he wouldn’t like that. He would tell you he’s the one who benefitted. “It makes you feel good,” he says of his time coaching wheelchair athletes. “It makes you feel fortunate.”

So instead, this is a story about the Atlanta tennis tradition he started and managed for 27 years. It’s a story about the people whose lives have been touched, whether as participants or volunteers. There are many, such as wheelchair athlete Rod Spence and ALTA volunteer Bunny Wardlaw, who helped him start the clinics, and longtime volunteers Susan Caller and Dave Dvorak, who have helped him run the clinics for years.

Although he still loves the clinics, the time has come for Walker to retire and let someone else take over. “I can still be involved,” he says. “I’ll help whenever I can.”

Volunteer service has always been part of the Walker family, beginning when daughter Jaime was born with cerebral palsy. “She has used some sort of mobility device since she was 18 months old,” he says. “My wife, daughter and I were spokespeople for Scottish Rite Hospital, helping them do fundraising.” As part of their duties, they attended a wheelchair tennis exhibition in 1989. Molissa Simmons, a former president of both ALTA and the charitable ALTA Foundation, was also there. She suggested to Walker that he start a local wheelchair clinic. “She told me she could get the volunteers if I could get the participants,” Walker says.

The Walker family was already attending a therapeutic horseback riding clinic on Saturdays with eight youth at the time. It made sense to add tennis to the itinerary. “We would ride on Saturday mornings and then head over to Blackburn for wheelchair tennis. We didn’t know exactly what to do, so we approached USTA and patterned our program after one of theirs,” he says. Walker’s first official clinic was held in the spring of 1990 at Blackburn, where it has been in continuous operation every spring and fall since — 440 Saturdays (if you don’t subtract for rainouts). And Walker has been at the helm.

Dvorak, director of tennis at Dunwoody Country Club, was one of Walker’s first volunteer assistants. “Ron created an environment where the wheelchair athletes knew they were going to have fun, work hard and play hard. They knew that every week the volunteers would do anything they could to help them improve,” Dvorak says.

Walker loves that the clinics give the participants a sense of accomplishment and inclusion. But he also loves that the volunteers come away with a new perspective. Many are high school students who need to log community service hours. “One girl came out to do her 10 hours and stayed for years.” That’s not uncommon, Walker says. “It gives them an appreciation for others.” Dvorak agrees: “I love watching the athletes and our younger volunteers grow as people.”

Jonathan Barnard is one of those volunteers who started young and stuck with it. As a 9-year-old Junior ALTA player, he took note of the wheelchair clinic during his first home match at Blackburn. Soon he was helping out. When his Junior team dissolved, he began volunteering every Saturday. He’s in college now, but continues to help out at the clinics.

The story is the same for many wheelchair clinic volunteers, including Dvorak, who sometimes brings his young daughter to help. “It is amazing to witness the dedication of the volunteers every season,” Dvorak says. “I love working with the family of people who are so dedicated to the program and to the athletes. Ron is the head of our family and is loved by every one of us.”

Walker stays in touch with many members of his clinic “family,” including a couple of the original participants. But now he’s ready to spend a little more time with kin. As retirees, he and wife Judy want to travel more. Not being in charge of the clinics “gives us the opportunity to pick up and go,” Walker says.

Now spring and fall will be for travel. Summer is for grandkids, who visit each year and stay for several weeks, attending summer camps, visiting museums and taking advantage of the public swimming pool at Roswell Park. That’s where Walker noticed 10-year-old Joel Haskell, who uses a wheelchair, at the pool with his father for swimming lessons. Walker approached them. “I asked him if he’d like to learn tennis.” They were at the very next session. Now the young wheelchair athlete enjoys telling others: “My brothers play soccer. I play tennis.” Walker adds, “He appreciates the feeling of inclusion now that he’s an athlete, too.”

Walker’s clinics have helped many people, including one woman who was paralyzed by a stray bullet. After she gave tennis a try, she declared it was the first time she had felt alive since her accident. Another woman, who was paralyzed during spinal surgery, enjoyed the feeling of freedom allowed by the easy maneuverability of the sports chair. Plus, tennis gave her an activity to share with her able-bodied husband.

Walker’s daughter, Jaime, explains it well. “My dad has a deeply held belief that this program does more than teach the fundamentals of wheelchair tennis,” she says. “In his eyes, this program serves as a vital point of community engagement for wheelchair users and their families. It serves as an important reminder that real inclusion of people with all kinds of abilities is possible when we even the playing field — or, in this case, the tennis court.”