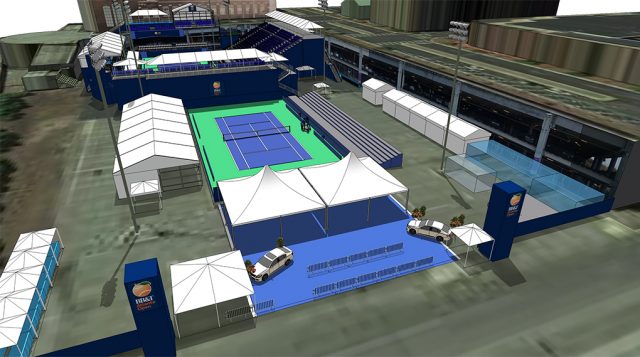 BB&T Atlanta Open fans spoke after the 2016 event, and the tournament has listened. For the first time since 2013, the premier tennis event in Georgia will introduce a new stadium design. Built by stadium construction experts Nussli, the new design, nestled into the parking lot at Atlantic Station, will provide fans with more shade and air-conditioned spaces, as well as more areas with activities for visitors, all while keeping the intimate feel of the venue intact.

“We are extremely excited to showcase our new stadium design to our fans in July,” says Tournament Director Eddie Gonzalez. “We took their constructive feedback from our 2016 fan survey very seriously and made it a priority to improve the fan experience at our world-class event.”

From July 22-30, tennis fans will be able to enter the renovated venue from a new main entrance on Fowler Street at the bottom level of the parking deck. They will find there a shaded bar and video board viewing area, where they can relax in between matches or follow the action with a cold beverage.

Once inside, patrons can enjoy a redesigned activation space that allows more area for FanFest activities. Additionally, sponsor booths will be moved from their previous location on Tower Street to inside the venue itself.

Stadium Court, where champions such as Mardy Fish, Andy Roddick, John Isner and last year’s Nick Kyrgios have been crowned, will be moved to what was formerly the AJC Grandstand Court.

When not enjoying a match on Stadium Court, patrons of the new VIP Stadium Club on the east side of the stadium can enjoy private air-conditioned viewing, an open bar and free food.

Gonzalez says he believes the changes to the stadium design for the 2017 BB&T Atlanta Open will enhance the fan experience at Atlantic Station, while retaining the intimate and friendly nature of the event. “Together with Nussli, we have created a venue that will highlight the many positives of our location at Atlantic Station, while also providing our guests and partners more opportunities for activation and staying cool in the summer weather,” says Gonzalez.

Fans at this year’s BB&T Atlanta Open will welcome back defending champion Kyrgios and top-ranked American Jack Sock. These young tennis players have been staples in the top 20 and are two of the most exciting players in the game.

Kyrgios and Sock will be joined by future Hall of Famer Venus Williams and former Wimbledon finalist Genie Bouchard, who will play a feature exhibition match Sunday night, July 23. For Williams, a seven-time Grand Slam singles champion, it will be her first professional match in Atlanta in more than 15 years. A complete list of the BB&T Atlanta Open player field will be announced leading up to the tournament.

Tennis won’t be the only source of entertainment during the BB&T Atlanta Open. Fans can enjoy live music, a fireworks show and the Family Zone presented by Wilson throughout the week. Nestled in Atlantic Station, the tournament provides easy access to food and shopping. To purchase tickets for the 2017 BB&T Atlanta Open, visit bbtatlantaopen.com/tickets. Use promo code ALTABBTAO. Be there!

The BB&T Atlanta Open returns to Atlantic Station July 22-30. Come be a part of the team that will host top-ranked men’s ATP World Tour tennis players in Atlanta. To learn more about volunteer opportunities, visit bbtatlantaopen.com/volunteers and complete the online registration. Contact BB&T Atlanta Open officials at volunteer@bbtatlantaopen.com with any questions.