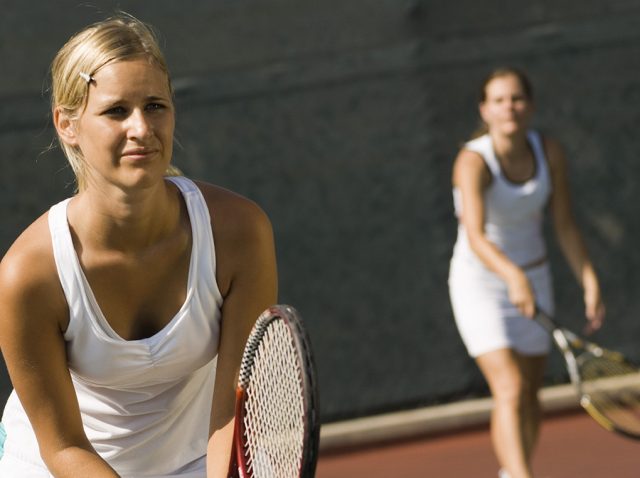 How often do you hear in doubles, “Your serve is only as good as your net player”? Holding your partner’s serve can be a simple task or it can be excruciating. That responsibility lies on the shoulders of the net player. The net player wants to make the two returners have a frustrating day hitting returns and make it extremely easy for his partner to hold serve. The three integral steps for the net player to make the returners have a bad day are how to move, when to move and communicating to the server certain tendencies of the returners.

The net player has to have an arsenal of movements on each and every serve to get the returner to take his eyes off of the ball during return of serve. The net player wants to include in his arsenal: fakes, crosses and a combination of both. For example, the net player can fake by using his head, shoulders, torso, hips, feet or a combination of the aforementioned. Net players can also cross on a predetermined play, cross on their own intuition, move and take over the middle of the court or even take up different starting positions at the net prior to the serve. Lastly, the net player does not have to fake or cross, but will be more deadly if they combine fakes, crosses and different stances. For example, the net player can fake a full cross by moving to the middle of the court, double fake, fake and cross, play “I” formation with fakes and crosses, etc. There are a hundreds of combinations of movements and setup positions, so try something different if you are having trouble holding serve. Also, if there is movement, it is human nature to notice and if you can get this notice by doing the above, then the net player has accomplished his goal and most likely has helped to hold his partner’s serve.

The timing of these moves can be utterly destructive to the returner and their focus. Fakes can take place at any time prior to or during the point of contact of the return. Fake early, fake often, fake at the point of contact and do your best to distract the returners. Change up the timing of your crossing as well. Start from a new position on the court, like right on top of the net, on the service line or near the center service line. If the net player moves at the exact same time from the exact same position, then the returner gets comfortable with that movement and it no longer bothers him. One of the best combinations for the net player is an early fake and then cross. The early fake catches the eye of the returner and now he thinks you are staying home. Almost every time the return will go cross court, and that plays perfectly into your next movement, the cross. Now the returner will get frustrated even more because he does not know the how and when of your movements.

And lastly, the net player can play an important part by gathering tendencies, strengths and weaknesses, as well as movements of both of the returners. The net player can provide that necessary feedback or data to the server. The net player can watch each returner and let his partner know the tendencies of both the forehand and backhand returns. Most doubles players play a particular side of the court because they prefer to hit a specific return repetitively well or they try to hide a weak return by inching over or running around a particular return. The net player should try to assimilate the strengths and weaknesses of each wing of each returner and relay that information to the server. Many times the server is so engrossed with getting his first serve in the court, placing the serve at the predetermined spot, not double faulting, making the first volley, etc., that the server is not able to figure out what the returners can and cannot do.

Remember, your serve is only as good as your net player. So next time you are looking for a partner, try to find one who is active at the net, wants to create movements that will distract the returners, and can give valuable feedback about the returner’s game plan.