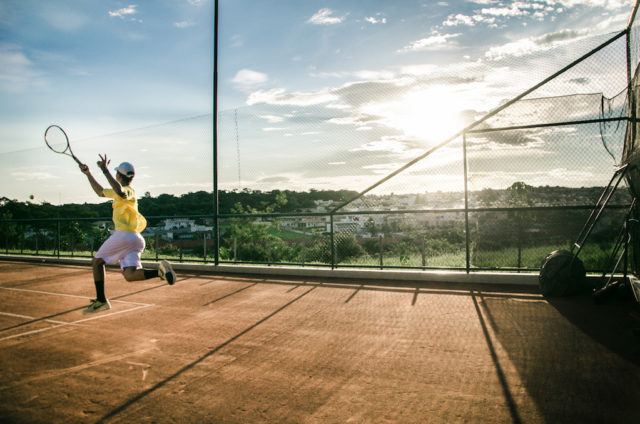 To play smart recreational doubles tennis, you must know in what situation you’re in every time you hit a shot. It’s important to recognize your opponents’ positioning as well as your team’s, as this will help determine which “gear” to play in: offensive, neutral or defensive.

Let’s take a look at these three gears and the most common situations in which each gear needs to be used.

Offensive situations are typically going to be found inside the baseline, and even more so, inside the service line. This is where your team will have the opportunity to hit the ball with pace, placement or a combination of both.

The decision of whether to bring pace or focus on placement depends a lot on the height of the ball at contact. Generally, the higher the contact the more pace will be used to create offense (think overhead smash!). These shots can be directed into an open court or at a player on the opposing team who is positioned inside the baseline.

If the ball is met lower, you can play an offensive shot, but you would have to be more reliant on placement to create the offensive opportunity. (Think offensive touch lob, drop shot or drop volley.)

A neutral shot is the most common gear used in recreational doubles. This means neither team is in a position, with one forcing shot, to win the point. A neutral shot should have a comfortable margin over the net and be played with some margin from the baseline or sidelines. A neutral shot should also steer clear of the player on the opposing team who is in the more threatening position.

Defensive situations can occur anywhere on the court, but will typically happen when a team is hitting from deep behind the baseline or has been forced wide off the court. The best defensive shots are played with a slow pace (think defensive lob or dink) to let the defensive team regain a better position on the court. Players must first realize that their own defensive shots will be able to be played by their opponents. The main goal of a good defensive shot is to force the offensive team to play a shot from a position that minimizes their chance to hit an outright winner. This will extend the point and hopefully give your team some chance of eventually winning the point.

As you work on improving your game, focus on the recognition of what “gear” you should be in as you play your shots. The more you do this, the more it will keep your opponents from speeding away with a win!