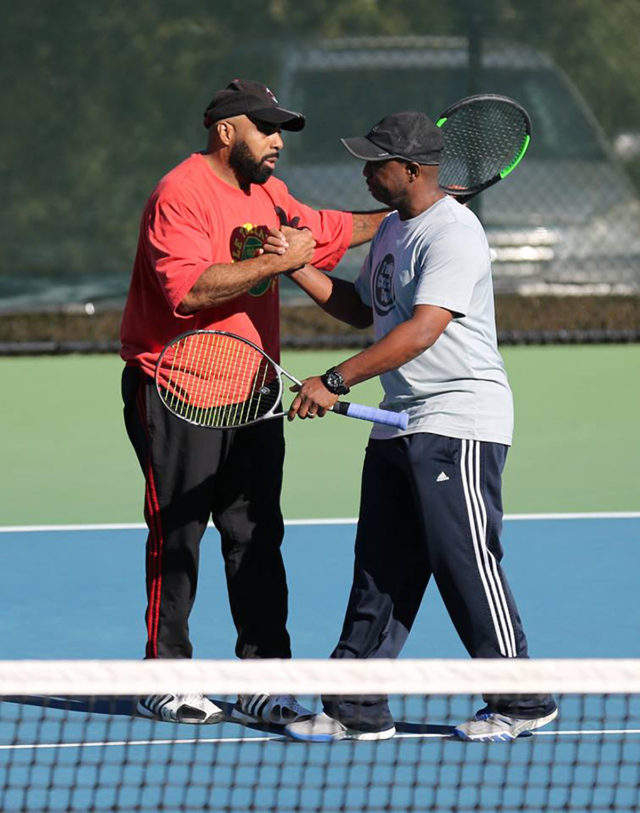 Percentage doubles is winning doubles. From the pros to recreational players, the teams who win most often are almost always the teams that hit high-percentage shots, rely on sound strategy, and avoid unnecessary risks. However, there may be times during matches where you and your partner will find yourselves in situations that call for unconventional attacks. In addition, you need to keep every opponent honest by varying your strategy from time to time.

So, when should you break the rules of percentage doubles? Here are five rule-bending shots that can help you win crucial points and keep your opponents guessing.

Full-Swing Serve Return
When returning serve, your primary goals are to get every ball back and to place it well. Your goal is to return low against a serve-and-volleyer and deep against a baseliner so your opponents don’t get an easy ball to attack. To go for an outright winner on the return of serve is generally a very low-percentage play, but if you’re facing a weak serve and are comfortable with your return, it can be an intimidating shot to occasionally go big.

Take a bigger swing from the deuce court (for right-handers). From this side, you can move around the serve and rip a big forehand cross-court, over the lowest part of the net. Plus, you’ll have the additional width of the alley to give you a little more margin for error.

Forehand Roll
If you’re at the baseline and pulled wide to your forehand side, the high-percentage shot is a low drive between your two opponents, with the next safest shot being a high, deep, cross-court lob, but if you love your forehand, this might be a good time to take a chance and go for a sharply angled cross-court return.

Keep in mind that the sharper the angle, the slower you should hit the ball; this shot is about topspin and placement, not power. A properly hit forehand roll can result in a clean winner or cause your opponent to pop up a shot that your partner can pick off at the net, or give you the chance to move forward and attack.

Down-the-Alley Blast
Hitting the ball down the alley in doubles is usually unwise. If the net player has properly shifted and has good hands, your alley shot will come back faster and leave you and your partner lunging for the ball, but there are three situations where attacking the alley is a good play.

Short Slice
A short ball brings your opponents forward and leaves you open to all kinds of attacks, but can be effective under the right circumstances. If your opponents likes to play one-up, one-back, and one of them is clearly uncomfortable at the net, hitting a short, low, cross-court slice and coming in will force this player to scramble forward and hit up, giving you or your partner a high volley to put away — or even an overhead.

As with every serve you hit, make sure your partner knows what’s coming. Serving out wide gives the receiver a good look down your partner’s alley, so it’s not the time to poach. Instead, your partner should fake poach on the serve. When the receiver is pulled out wide by your serve and your partner fakes toward the center, the receiver will see a wide-open alley and might incorrectly aim for it, but your partner will be standing right there to hit the volley winner.