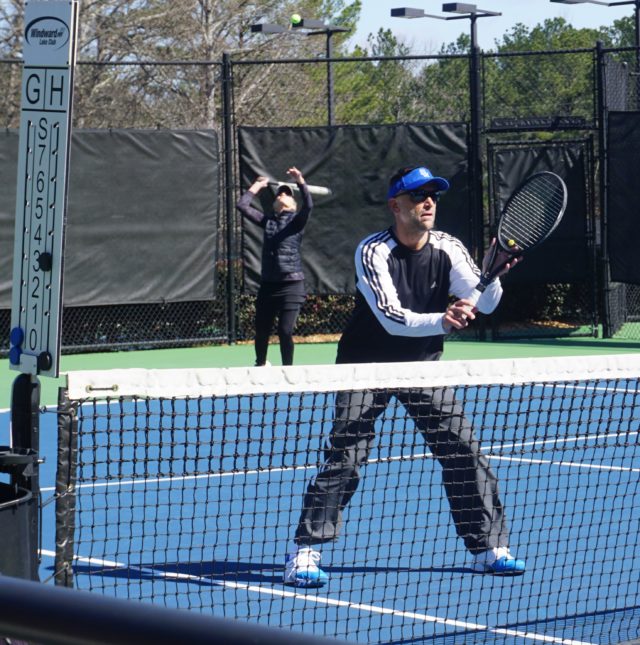 February 29th at 4:47 p.m. was the official end to the 2020 Senior Mixed League winter season. It was a season that participants will most likely remember, though they may not be the fondest of memories.

The 2020 Season had five rained-out match days, four rained-out make-up days, three weeks where both the match day and make up were rained out, a two-hour rain delay at the City Finals, and one ill-timed double fault that occurred at 5-6, 30-40 in the third set of a deciding City Championship match. That we got through this season with minimal defaults and surprisingly few conflicts among teams is a testament to the commitment, communication, and cooperation of coordinators, captains and players. Captains kept in touch with their players and their opposing captain. They shared information about makeup availability and encouraged players to make up matches before the default date. No matter the home team, players agreed to play at the facility most likely to have playable courts. Without the efforts of these players and captains, this season would have been much more difficult.

Just in time for the post-season, some dry weekends were in the forecast. The first two rounds of playoffs were played on sunny days. The sunshine was very welcome, as the temperatures were in the low 40’s with 20 mph winds.

It took a few hours, but the City Finals had great tennis weather. There was a two-hour weather delay with the AA’s, A’s, and C’s, but eventually we had blue skies and warm temperatures. Players armed with squeegees, blowers, and towels descended upon the courts to get them in playing condition. Along with the sunshine and a light breeze, most courts were playable by 11:00 a.m. A few courts shaded by nearby trees were slow to dry, but thanks to the cooperation and help of the Windward staff and maintenance personnel, we were able to move those teams to other courts. It was important to get the matches started as quickly as possible, as some teams had players who were also scheduled to participate in the Mixed Doubles semi-finals played later that day.

Having a season go smoothly needs the efforts of the captains and players. Great attitudes and displays of good sportsmanship were abundant throughout the many rained-out (plus one snow day) Saturdays. Willingness to cooperate in getting the matches made up also was much appreciated.

The weather is certainly one reason I will remember the 2020 Senior Mixed Season. Another is the spirit and commitment of the ALTA membership. Thank you for making my first season as the Senior League VP a memorable one.