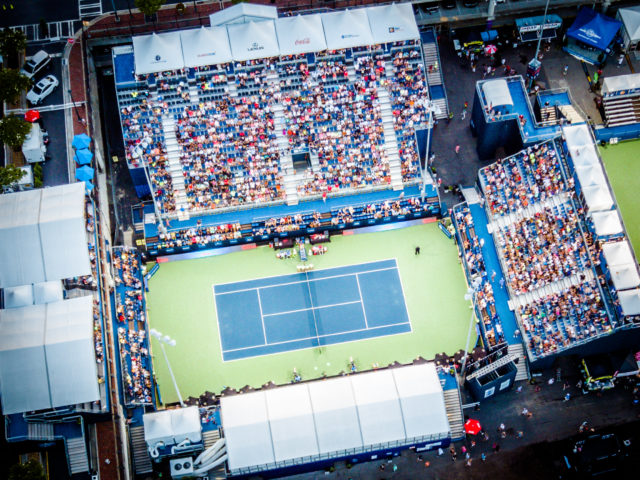 It’s the event Atlanta sports fans have been waiting for all summer.

Notice I said sports fans and not just tennis fans. In less than 10 years, the BB&T Atlanta Open has become “the event” of the summer in Atlanta. With crossover appeal in the entertainment and sports world, this ATP World Tour event will bring the top men and women in professional tennis to Atlantic Station for nine days of action starting July 21, and there are some new possibilities to consider when purchasing your tickets.

BB&T Atlanta Open Tournament Director Eddie Gonzalez has always made the claim that the BB&T Atlanta Open is the “mini US Open” right in Midtown Atlanta, and it’s never been more evident than this year.

The women serve it up on Sunday night, July 22, with a 2017 US Open singles final rematch featuring Sloane Stephens and Madison Keys. Last year, the women’s match in Atlanta sold out, so get your tickets ASAP to see these top Americans.

What’s new? Perhaps a five-peat? Four-time BB&T Atlanta Open champ John Isner is looking for title No. 5, but he will have to outlast a talented and hungry group of competitors. American Jack Sock and 2017 finalist Ryan Harrison are returning, as is 2016 singles champion Nick Kyrgios of Australia. The Bryan brothers (Bob and Mike), the most decorated doubles team of all time, love Atlanta and are looking to add yet another title to their impressive résumé.

Once again, Atlanta crowds will get a chance to cheer on 20-year-old American Frances Tiafoe. To say Tiafoe is exciting is an understatement, as he is moving up the rankings and won his first ATP World Tour singles title earlier this year at Delray Beach.

While Atlantic Station itself draws attention as a unique venue to host an ATP World Tour event, the tournament keeps getting bigger and better.

“As we saw in 2017, the new stadium design provides our fans with what they have been asking for – a more intimate feel, more open space for better viewing angles and, of course, more shade,” said Gonzalez. “We think we’ve made more strides with our 2018 improvements.”

See tournament updates and get your tickets and packages now at bbtatlantaopen.com.

HERE ARE THE ADDITIONS FOR 2018

Juniors to College
Picture it: Your entire team is cheering you on as you battle with an opponent in the third set of a deciding match. The atmosphere is electrifying. You know that you’re growing, learning and developing as a player and creating strong friendships and bonds with your teammates that will last for years to come. Endurance and the courage to never give up – along with the thrill of being part of a team – these are some of the qualities that you will receive from playing college tennis.

So, what are the most important qualities to prepare juniors before they embark on the journey of college tennis? A wise man once said: “Time waits for no man.” Practicing good time management is just as important as those grueling hours of practicing your strokes on the court. College is known to encourage self-management, freedom and individuality. With these privileges, it becomes your responsibility as a player to show the same work ethic on the court as in the classroom.

In college, your schedule will be full; many days, you will go straight from class to practice and conditioning. This means that there might not be as much time in between your activities; you have to find balance to manage your studies. This preparation will ensure that you are representing the university well – not only as an athlete but as a student as well.

Harness your ability to stay in the fight, regardless of the score in the match. This can be as essential to college coaches as your ability to play. Coaches want to see that you are giving everything you have and getting everything that you possibly can out of your time with the team, which is why they look for players who are eager to work hard and improve themselves. This mindset will eliminate any doubt as to what could have been if you had given more. This is vital because the fight that you show will lift and encourage the rest of your team to achieve their goals. College tennis teaches players to become selfless because they have to put the interests of the team before their own. Being part of a team is a great privilege, but also comes with personal sacrifice.

Work on your ability to take instruction. The great Roger Federer once said that players should fear no one, but respect everyone. This not only means your opponents but your coaches as well, who are always going to try to improve and stretch you regardless of the score and the circumstance. Being able to improve your game is built on the cornerstone of your ability to receive coaching. This removes a major obstacle to improvement that hinders many players from reaching their full potential. This trait alone is what many college coaches would agree has allowed some of their top players to succeed.

College tennis is not for the faint of heart. It requires everything you have – blood, sweat and tears … and did I mention sweat? The common thread of what makes college tennis great is the team aspect – celebrating in the laurels of victory and being there for each other in the dust of defeat. Playing tennis for a college is an experience that you will remember for the rest of your life. And with a little preparation and the right attitude, you will have more success on this great journey. —Sebastian Nunez, BB&T Atlanta Open Ball Boy