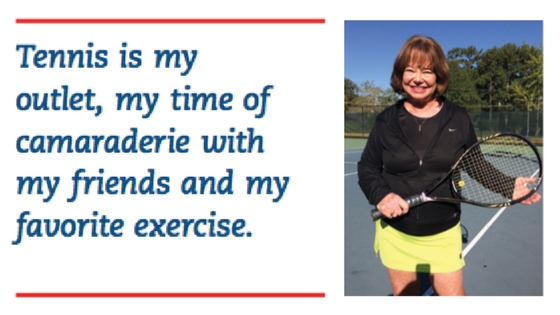 I began playing ALTA tennis when I was 50 to meet more of my neighbors, to get exercise and to help reduce the stress of my position as senior vice president with Bank of America, managing a large office that handled the finances of some of the wealthiest and most prominent professionals in Atlanta.

Eleven years ago, I was playing in an ALTA Seniors match. About midway through the second set, I started to run for a ball, but my feet and legs wouldn’t move and I was suddenly very short of breath. I had always been in good health, so I knew immediatelythat something was wrong, but we finished the match somehow … and won!

I called my doctor the next morning and made an appointment. After being checked for a pulmonary embolism, they scheduled me for an echocardiogram and then a heart catheterization. My cardiologist gave me the bad news — I had a rare progressive and fatal disease called pulmonary arterial hypertension. I asked him when I would be able to play tennis again and he said, “You are never going to play tennis again and you probably only have two to five years to live.” Needless to say, my husband and I were in shock.

My physician made sure I got the best of the best and made an appointment for me at the Mayo Clinic in Rochester, Minnesota. I was given a drug that seemed like a miracle drug so I was back on the courts for about six months, but I began going downhill again. When I went back to Mayo, my condition had deteriorated to the point that my doctor said I needed to go on IV drugs, but I had an abscessed tooth, so we couldn’t implant the catheter into my heart to begin the drug for another month while I continued to decline. Once I had the catheter, we began ramping up the drug slowly, but my heart continued to enlarge and it was harder and harder to breathe.

In August 2007, my doctor said I probably would not live until the end of the year without a lung transplant, possibly a heart-lung transplant. I didn’t want to do that because my odds were not very good, so I asked for other options. The only one he thought had a chance was to increase my oxygen concentrator level and begin ramping up the IV drug even faster. That’s what we did, but the side effects were pretty bad and I could barely walk across the room. By December, however, I was beginning to be up and around again and I just knew it was working.

I kept getting better and began playing tennis again in the spring. First, I had to appeal to ALTA and USTA to allow me to play with an oxygen tank on my back and my drug pump in a fanny pack. They both agreed, and I believe that I may be the only tennis player they have ever approved to play this way! I had to carry a letter with me to prove at every match that I had permission.

My next major medical event was in May 2010, when I developed a high fever. My doctor recommended that I go directly to the ER to have blood cultures run faster to find out what was going on. My daughter took me and while we were sitting there waiting to be triaged, my respiratory system shut down and I was code blue. My fever spiked to 108 and I had sepsis, depriving my brain of oxygen for several minutes. After I was stabilized, my family was told that I might not live and that, if I did, I would likely have severe brain damage. But again, good medicine and a will to live pulled me through. I was back on the tennis court by the end of the month!

I continued to improve and was moved off the drug pump and the daytime oxygen so I could play tennis normally again. Because of my story, the doctors at Mayo began to believe that the start-stop type of exercise provided by doubles tennis is the perfect type of pulmonary rehabilitation for pulmonary arterial hypertension patients, and they are encouraging others to try it. I am still their model patient for the way ALTA tennis and I have fought this terrible disease.

Tennis also came through for me when I broke my arm in 2015. I fell over a stool in the dark while trying to check the weather for an ALTA match the next morning! I was required to keep my left arm immobile for eight weeks, but after five weeks, I had to get back out on the court to release endorphins to help with the pain. It worked and I also developed a decent one-handed backhand that I’d never had before.

Through the years, there have been a number of times when everyone expected me to be sidelined, like when I found out that the “stitch” in my side after I played two matches in one day last year was actually pleural effusion and pneumonia and required hospitalization. I only missed one match that season, going from a playoff match directly to the hospital with pneumonia and having to listen to the next playoff on a phone call, but being back for City Finals. Tennis has always brought me back to good health!

I’m not the greatest tennis player (I play B-level tennis on Senior and Thursday Women’s teams), but I also serve as captain of both teams and try to make every practice and match, plus participate in various round robins and even a tournament or two. Tennis is my outlet, my time of camaraderie with my friends and my favorite exercise. But it is also my lifesaver. Without the goal of getting back to playing tennis, I’m not sure I would have come back from any of these events. I hope to be playing ALTA tennis into my 80s!

By the way, every time I see my cardiologist, he asks if I’m still playing tennis and gives me a big hug and says he is so glad that he was wrong!