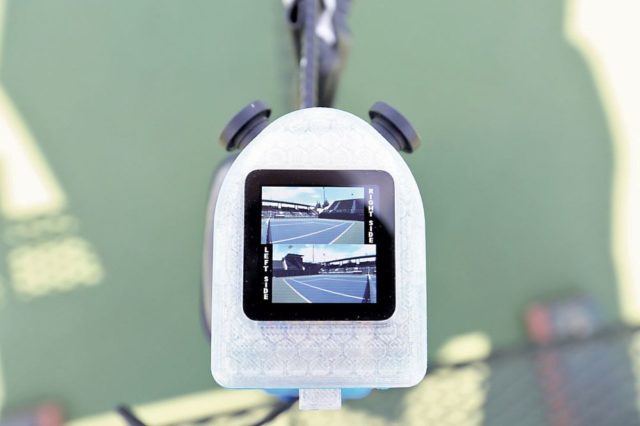 Arguments over line calls are the bane of tennis players everywhere, and often a major cause of headaches for parents, tournament directors and tennis facility staff. But now, a new device by inventor Grégoire Gentil may help bring order to the court.

Called “In/Out” (and available for purchase at inout.tennis), this small, $199 unit attaches to any netpost, on any type of tennis court and detects whether balls are in or out. On Aug. 28, Gentil’s In/Out device won first prize in the Tennis Industry Association’s “Tennis Innovation Challenge,” held in New York City during the US Open.

“I’ve always been a tennis lover,” the lifelong tennis player said. “The In/Out device really came about because of my passion for tennis and my ability and background for inventing products for consumers. The idea was to have something for recreational players that was inexpensive — that basically would be in the same price range as a new tennis racquet.”

About the size of a GoPro, In/Out has two cameras, which each monitor one side of the tennis court. The unit attaches to the top of the net post with a plastic strap. When a player pushes a button on the screen on the top of the device, In/Out scans the court to find the lines using artificial-intelligence software — an auto-calibration process that takes 10 to 15 seconds. The unit runs on a standard battery and also has a USB connection.

“During play, in real time, you can have a green light flash and a single, audible beep when the ball is in,” Gentil said. “If the ball is out, you’ll hear multiple beeps with a red light.”

In/Out also can provide statistics and HD video playback, which players can use to help them improve. For instance, after playing or practicing, In/Out can show where all shots landed, how high the ball was, how fast it was going, the spin on the ball and more. Gentil said the software he uses is similar to what is being used in self-driving cars.