At the beginning of March, Infinite Energy Arena played host to the Premier Live Atlanta Challenge, an exhibition match between Rafael Nadal and Grigor Dimitrov, which marked the first time that Nadal had played tennis in Atlanta. The event was a fundraiser for The Rafa Nadal Foundation, and was a resounding success the organizers say.

Prior to the match, both Nadal and Dimitrov were made honorary members of ALTA. The organization played a key role in getting these men on court — literally. Two ALTA members were lucky enough to chauffeur the players around town during their stay. Here are their stories:

According to ALTA Men’s League VP Lamar Scott, when he received the call asking if he would like to drive the world’s former number-one tennis player, Rafael Nadal, and his team around during their visit to Atlanta, he eagerly accepted. “I mean, who wouldn’t?” he said. Here is Scott in his own words: 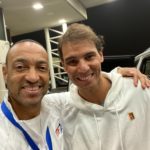 From the moment his private jet touched down and I drove onto the tarmac to greet them in a brand new Cadillac Escalade (Official Car of the 2020 Premier Live Atlanta Challenge), I was tremendously excited. I didn’t know what to expect, but I knew I was in for an extraordinary, once-in-a-lifetime experience. And indeed it was!

As a tennis enthusiast and coach myself, I am keenly aware of Rafa’s tennis prowess. However, I learned very quickly that tennis is not his first love. As we loaded up the SUV and pulled away from the plane, one of the first things he asked me was how long it would take to get to the hotel so he could watch the Madrid vs Barcelona soccer match. I jokingly responded that it would take an hour and a half. His look of utter despair quickly changed to total laughter when he realized I was joking, and he would not miss any of the soccer match because we were only 15 minutes away. It was then that I realized Rafa is not only a huge soccer fanatic, but he also has a great sense of humor.

As we cruised around the city over the next few days before heading to his tennis match, he often would talk about soccer in Spain and how participating in the sport as a kid allowed him to develop such great footwork on the tennis court. I was impressed that he was so knowledgeable about the sport in general and specifically the Atlanta United. When he wasn’t conversing with his team or joking with others, I would often see Rafa balancing a tennis ball or wad of paper on his foot and kicking it in the air with the greatest of precision for minutes at a time.

When I dropped him off at his jet following the exhibition match, he asked me to lean in for a photo as he thanked and reminded me to “continue to be a positive.” As he was about to board his plane, I presented him with an Atlanta United jersey to remember our city. He gratefully and joyfully accepted it like a kid with a new toy; as if it was the best gift he could have received from Atlanta.

After spending time with Rafa, I have a new appreciation and respect for him. He is genuine, down-to-earth, and very fun to be around. My admiration for him was multiplied as I learned more about him as a tenacious competitor, an excellent role model for youth, and a modest/caring human being. 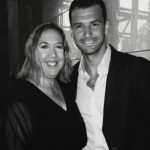 Being an avid ALTA player and working in the tennis industry, I was thrilled when I got the call from Judi Edwards with the National Tennis Foundation and Trevor Short with Premier Live. They reached out to ask if I would drive Grigor Dimitrov and his team around while they were in town for the Premier Live Atlanta Challenge. What is better than driving a Cadillac Escalade onto the tarmac at Peachtree-DeKalb airport to meet a world-class tennis player disembarking from a private jet? Dimitrov even uses Tourna Grip, which is manufactured by the company I work for. Dimitrov is a kind, polite, and handsome man.

Here are some fun facts: he is an only child; he owns and loves his Lamborghini; he is close with his mother; and he has great bonds with his male friends who came to Atlanta to support him. He likes the recording artist, The Weekend, and his team refers to him as “G.”

After the charity dinner at Umi in Buckhead, I was prepared to take them to an Atlanta hot spot, but Dimitrov said, “I need to head back and rest. I have to beat Rafa tomorrow.” After I dropped him at the Atlanta airport, he thanked me for being so kind and said, “Remember, be yourself.” I was a Dimitrov fan before, but even more now. Having so much passion for the sport, it made it a truly memorable experience I’ll never forget.

It shouldn’t surprise tennis fans that Nadal won the exhibition match (in two sets). What’s important is that a lot of money was raised for a good cause, and Atlanta tennis fans finally were able to watch one of the best players in the world on a court in their own backyard.