Every person who volunteers for the captain role on an ALTA team brings a unique set of skills, abilities, and personality. When someone stays in this role for many seasons, that kind of dedication, volunteer effort, and love for ALTA earns that person the spotlight in our Captain’s Corner.

Marie Gaffney Cooper’s teammates describe her as “the best captain ever,” “the complete package,” and “the real deal.”

Teammate Diana Myers shares: “I joined ALTA in 1982. Because tennis is such a huge community, it is like family and we all share this love of tennis year-round.” She met Cooper through two good friends — Melziner “Mel” Stover Culbreath, who is no longer with us, and Melvina “Mel” Jefferson, who was on the team with Cooper. These two ladies asked Myers to join their Tolleson Park Tennis Center team (Smyrna) in 2006. “This was an awesome tennis team, and it was not about winning all the time, but it was about having fun and that you gave it your best,” says Myers.

One trait of Cooper that stands out is her willingness to always put others first. “When she made the lineup every week, she made sure everyone had a chance to play,” says Myers. She adds that Cooper made sure that teammates had directions to away matches and if the team was home, she made sure that everything was in place for the visiting team before they arrived. Cooper always gives 110 percent to this day, and she truly is dedicated and loyal to everyone on her team. “She is the real deal, never sweats the small stuff, and is the best tennis captain ever,” exclaims Myers.

Another teammate, Jane Warren, who met Cooper in the late 1990s, also has tremendous respect for her and says: “Since then, she has played on Senior Women’s teams, has played and captained Mixed Doubles teams, captained my Sunday Women’s team for the past 15 years, and also had a several-year stint as an ALTA coordinator. She is the complete package as an ALTA teammate and captain. In addition to being a great player and tough competitor, I have seen her support the team in countless ways both on and off the court.”

Over the years, Cooper has become a family member to many of the players on her team. She has been to numerous weddings and funerals; she has hosted retirement parties, wedding showers, and baby showers; and she has provided countless hours of babysitting so that the moms on her team can play when childcare is scarce. A couple of years ago, one of her teammates passed away, and the family asked Cooper to deliver some remarks at the funeral. “As expected, Marie did a wonderful job. These are just a few of the examples where Marie has made a difference in our lives,” says Warren. 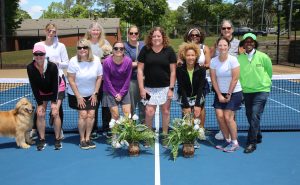 Cooper’s magic is her perseverance, grace, and ability to nurture relationships on and off the court. Warren remarks, “When Marie got married in late 2019, there were about forty people at the wedding who had met her through tennis.” There would have been more had it not been on a holiday weekend. On the court, Cooper has had some big wins, but what Warren remembers more is that she is a good sport and is graceful in both victory and defeat.

She also can be stubborn. During one match, she broke a bone in her foot, but she would not quit — and she came close to winning the match. Several times, she has run a 10K or half-marathon and then rushed to the courts so that the team could avoid a default. Warren says the team often jokes that the one word that defines Cooper is “bossy,” but the truth is she has kept them together through thick and thin. “We have been so lucky to have had such a wonderful captain and friend,” she says.

Thank you, Marie Gaffney Cooper, for all the special ways you have given so much to your teammates and others. This is the hallmark of being an outstanding ALTA captain.