For this ALTA team, winning isn’t everything

It’s a team like no other with a season like no other and the true essence of ALTA. For the Cartersville Country Club summer mixed doubles team, it truly was the perfect season, and they will make history at the club with their first-ever ALTA sign. You can see that is says 0-35, Keep Hope Alive. Wait a minute. How could they have an ALTA sign with this losing season? Well, it was far from a loss in the eyes of this newly formed team.

Captain Andrea Surcey has been playing in ALTA leagues for 14 years. She says never has she had the pleasure to be around so many dedicated and enthusiastic tennis players. “This team formed out of a new initiative at a country club that typically had very little interest in tennis,” says Surcey. As a brand new team, she says they practiced twice a week for seven weeks prior to the start of the summer season. “My team NEVER stopped showing up for practices, never gave up, and never complained,” she says. 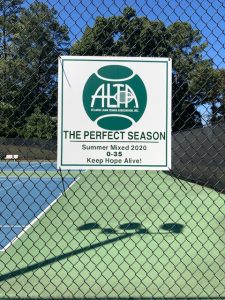 The team lost every single match, but that did not dampen the spirits of these players. Instead, the majority of the team wanted to continue to practice even after the season ended, as a way to prepare for the upcoming winter mixed season. “The best ‘win’ we had was getting to know each other. I love these folks, and they truly enjoyed being on the court for all of the right reasons,” Surcey explains.

It’s quite a history as Surcey made it her mission to improve the tennis atmosphere at the Cartersville Country Club, following a two-year hiatus with no tennis programs and no tennis professionals. Now the club is flourishing with adult teams, great pros, cardio tennis, and junior clinics.

In the middle of all of the issues associated with COVID-19, things were slow to get going at the club, but like others, Surcey knew tennis was one of the best sports in which people can still socially distance. Teammate Lars Ennerberg agrees and says tennis was a great way to get out of the house during this pandemic. “Because of the relationships we made as a team, it helped to rise above those losses. We just had a lot of fun, and it was so amazing to simply get out in the evening and play tennis with people I now consider my friends,” he says.

Surcey says so many people put a tremendous amount of effort to make this a special tennis community. “We had 25 players on the roster, many of whom had not played in several years. We made the call to order our ALTA team sign. …This will be the first ALTA sign in the history of the club.” And that sign will forever have a legendary story behind it in Cartersville.