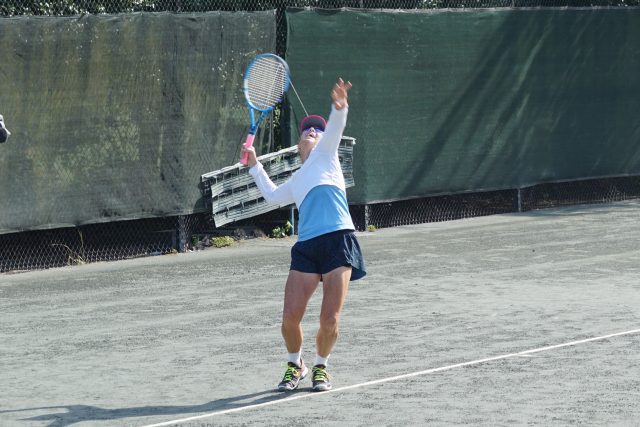 Her personality is infectious, her passion for tennis is unmatched, her heart seems to be made of gold, and her friends say there is no one quite like her. If you grew up as a junior in the 70s and 80s, you remember losing to her. If you continued to play at the highest level of ALTA and USTA as an adult, you know her. Everyone who meets her loves her, but NO one likes to play against her. Meet Lee King…an Atlanta tennis legend.

An Atlanta native who first picked up a racquet around the age of 4, King gives a tremendous amount of credit to her mother, Anne Preston King, for getting her interested in the game. King says her mother always encouraged her, and they won several tournaments together, which ultimately earned them the number-one mother/daughter ranking in the South.

King graduated from the College of Charleston and worked as a paralegal for a number of years, but tennis was still a big part of her life. She continued to play tournaments, and one year she ran up against Kathy McGee, a former junior ranked player who first met King at Peachtree World Of Tennis as teenagers. “We were playing on clay, which Lee really didn’t like,” McGee remembered. “We won the first set easily, and my lob was just ‘on,’ and that was driving her crazy.” McGee says after that first set, King flung her racquet to the fence and exclaimed, “I can’t believe you hit the line AGAIN on that lob.” In all of the years they played against each other, McGee says she had never heard King have such an outburst. It turned out to be one of the few losses King has endured.

Another long-time friend and teammate, Ashley Massengale, who has quite an impressive tennis resume herself at Yale and as a former USTA Atlanta President, has great memories playing with King. They first met when Massengale says King gave her a beatdown in singles (twice) 12 years ago. “Eventually, I was smart enough to get her on MY side of the net. She is one of my favorite partners; she’s so fast and amazing at the net,” says Massengale.

King has been teaching tennis for the last 35 years at Westminster Schools and at Brookwood Hills. King has a special connection to Brookwood Hills, as she grew up in the neighborhood and has taught there for years. “Lee has taught us so much, and now we are noticing scenarios she has coached us through that actually happen during a match,” said Suzanne DeRiso, who is captaining a Brookwood C-level team and is playing matches and ALTA for the first time. “Just a few weeks ago, we played at Bitsy Grant and were only a few courts down from a match Lee was playing. “It was so inspirational to watch her play!”

She’s an inspiration, and her friends cannot do justice in words as to what a tremendous person, friend, and captain she has become. She is described as one of the nicest people you will ever meet. “As a captain, she gives everything to her team. She always has a good attitude and is fair and friendly to her opponents, who often hear ‘good shot’ from her. But most of all, she’s just a great person and a great friend,” says Massengale.

Even though her ALTA and USTA trophy case extends beyond 100 plates and awards, it’s the lasting friendships that mean the most to her — that and tennis memories of her mother, who passed away from cancer. “I was only a teenager when we played together, and I didn’t really understand what that time would mean, but I sure do now and am so glad I played on the court with her for so many years,” says King.

Lee King — winning on the court and winning at life.