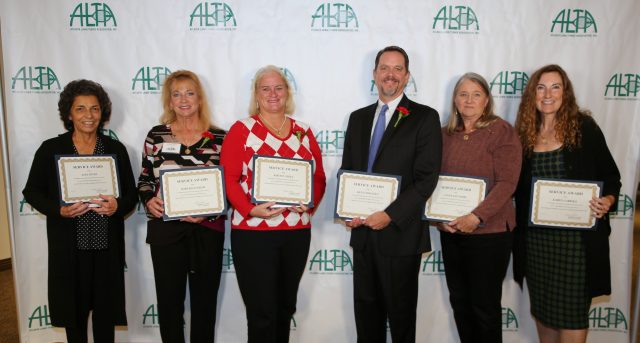 One of the key highlights of the ALTA annual meeting is the recognition of the major workforce behind this successful nonprofit organization. Each season, league coordinators donate their time to make sure everything is scheduled and arranged for league play. ALTA honors these folks who go above and beyond by naming them our Coordinators of the Year. The 2021 winners are:

Karen Carroll
Thursday Women’s League
Place of birth: Toronto, Ontario, Canada
Career: Industrial Engineer (ramblin’ wreck), Domestic Engineer (mom of 3), small business owner/partner (with my sister), in that order
ALTA history: Started playing ALTA in 2006. I’ve served as captain or co-captain on many of these teams at one time or another, though I am currently enjoying being just a regular player. I’ve been an ALTA coordinator for the Thursday Women’s League since Fall 2018, the last two seasons at level C8.

Carroll is regarded as a great asset to the Thursday team. “It is not easy being the coordinator for the C8 group. Many of the players are new and captains turn over quickly from season to season,” says Keri Beck, Thursday Women League VP. Patience and kindness are essential for any coordinator, but even more so for one tasked with helping these ladies. Beck says Carroll has done a fantastic job making herself available to these captains and communicating frequently with them.

Houston is described as a steady, reliable Men’s League Coordinator, which Men’s League VP Mitch Falkin says is exactly what is needed. “He is well thought of by the captains and other coordinators alike; he has a very positive outlook,” says Falkin. He goes on to say that Houston is an excellent representative of the ALTA volunteer spirit. “We are very lucky to have him in our ranks!”

For 2021, Ingram has served as overall for the Senior Day Leagues. Senior Day Leagues VP Cathy Gonzales says she makes such a difference with her positive attitude and her knowledge of ALTA, and her ability to solve challenges. “Barbara loves tennis, she loves ALTA, and she devotes her boundless energy to make ALTA tennis more organized and more fun,” says Gonzales. Ingram has volunteered in several ALTA leadership roles, including overall coordinator for the Sunday Women’s League, Mixed Doubles League, Senior Women’s League, and the Senior Mixed League. She also holds an important job as 2021-2022 Media Vice President.

Jane Jones
Junior Leagues
Place of birth: Brooklyn, New York
Career: Ran a small chain of record stores
ALTA history: Played ALTA for approximately 30 years. Coached for about 20 years. Started playing on a C7 ALTA team and made her way up to AA2.

Junior Leagues VP Tammi Copelli says she is honored and thrilled to have Jones as the Junior Leagues Coordinator of the Year. Jones moved to Atlanta in 1987. Her new neighborhood had tennis courts, so she started playing and eventually earned certification to become a teaching professional. “Tennis brought so much fun to her family’s life that she said she wanted to teach others so that they might have the chance to experience all the benefits of playing tennis,” says Copelli. If that was not enough, she volunteered to be a coordinator the fall season of 2000 to give something back to the sport that gave her years of joy.

Saunders has served as a coordinator for more than 18 years. She knows the rules and can explain them to the captains. “Her customer service skills are polite and professional, and she is always willing to help in special situations,” says Sunday Women’s League VP Linda Shepherd.

Sykes has been a long-time volunteer for ALTA and has fulfilled several positions from team captain to league VP. Although Sykes has recently moved to Florida, she continues to serve as a coordinator. Even though she is remote, she also makes sure to show up to important events. “She came to Atlanta to help supervise the Mixed Doubles City Finals competition. She always has a positive attitude, never complains, and always helps her teams have a fun experience,” says Judy Battles, Mixed Doubles Overall Coordinator.