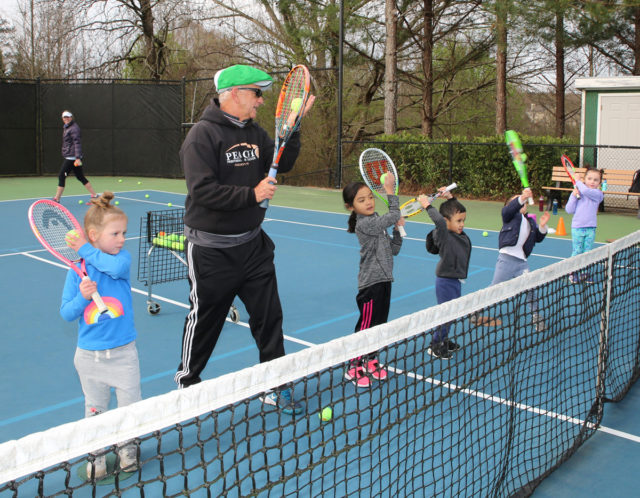 At the center of it all is Tricia Hanson, who developed the Peach Performance Tennis program at Fieldstone in July of 2013. Hanson, a Blessed Trinity High School varsity tennis player who later received a full tennis scholarship to Western Carolina, says she and her staff work hard to create an inviting, fun environment where all players feel welcome and part of a team. “Tennis is unique in the fact that it is a lifetime sport,” Hanson said. “Through events, social mixers, and league play, we are dedicated to bringing the community together through the sport of tennis.”

Hanson credits her support team, which she says is like family. “Over the years, I’ve been fortunate to work alongside some incredible pros. They are invested in the kids’ and adults’ progress and truly care about them, not only as players but as a people,” she said. Coach Mike Corpening has been a part of the Peach Performance team for the last five years. “I can honestly say there is not a kid or adult who steps on the court and does not love tennis more because of Coach Mike,” Hanson added. “Our staff culture is something special, and our growth over the years is a direct reflection of our team.”

People in this community agree. Cory Jones picked up a tennis racquet for the first time three years ago. She joined a C-8 ALTA team and says she had no clue as to what she was getting herself into. “I started getting lessons with Coach Tricia, and she taught me so much. She is an amazing coach. This was the beginning of my tennis obsession,” says Jones. She also gives credit for her growth as a player to Corpening and the staff who have played key roles in developing the tennis program. Since beginning her lessons, Jones has moved from a C-8 team to two A-8 teams and a B-4 team. Jones’ husband, Brad, played tennis in middle and high school but hadn’t played since college when he joined a Fieldstone team. “Having such a large tennis community has helped him find his passion for the sport again,” Jones said.

Denise Faust moved to Georgia five years ago and although she wasn’t specifically looking at moving into a tennis community, she fell in love with the five different neighborhoods that feed into Fieldstone. Soon after relocating, she picked up a racquet. “I was hooked immediately and decided to put together a team the following year,” Faust recalled. “My husband and kids started playing, and we’ve all enjoyed great seasons. However, more important than our successes on the court are the relationships we have formed.” She says members of the first teams her family joined are now their closest friends. “Tricia and her staff do a great job of getting people hooked,” Faust said. “They make it fun by being encouraging and positive, while challenging us. Whether it’s the kids’ summer camp, the social events like the tacky Christmas sweater party, or the Halloween dress-up night, the camaraderie at Fieldstone makes it so much fun.”

Fun is the key element, and Micaela Brady says Hanson has just the right blend of tennis instruction and life lessons for all ages. There weren’t any junior programs at Fieldstone before Hanson took over. “She put together the junior program, and in six shorts years, it has blossomed into one of the best in the Atlanta area,” Brady said. “While she teaches the kids the skills to play the game, she is also teaching important life values and how that translates on the court. Terms like honesty, character, and sportsmanship are used often while she is teaching. Her passion for the sport is contagious, and my kids have found a forever love for tennis.”

What Craig Hoffman found while searching for a summer camp for his daughter five years ago was not what he had planned. Hoffman drove about 30 minutes from his home in John’s Creek to get to the camp. “Once we saw the amount of kids engaged in tennis and the excitement that Tricia and her team brought to that group, we moved later that summer to the Fieldstone community,” Hoffman said. He says with nearly 1,000 homes in the combined neighborhoods, the 12 tennis courts have become the center piece of the community. Fieldstone – the neighborhood that plays together and wins together … on and off the court.