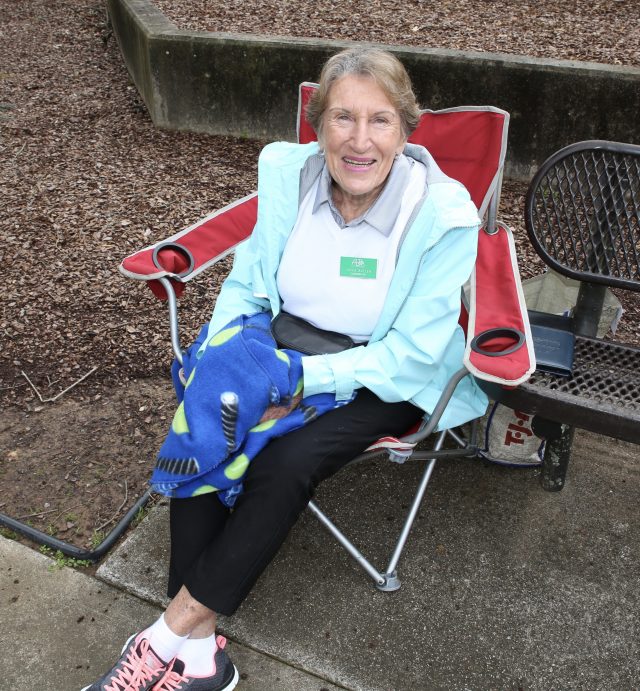 She is by far one of the most respected, admired, and extraordinary volunteers in ALTA’s history, and now she has decided to retire as a volunteer after nearly 40 years of service.

Joyce Butler was always an incredible athlete. Whether it was skiing, swimming, skating, or hiking, she participated in nearly every sport growing up — except tennis. That all changed at the ripe young age of 40 when she first picked up a racquet and joined ALTA in 1976. It was only a few years later that longtime and well-known volunteer Bert Ardoyno asked her to a be coordinator. That would lead to decades of volunteering as a coordinator in both the Mixed Doubles and Thursday Women’s League, in addition to serving on the ALTA Foundation.

Butler will turn 85 in November, and while she no longer plays tennis, she still gets together with old teammates and friends. Some of her fondest memories include playing tennis out of her neighborhood of Embry Hills in DeKalb County. “We always had the best food in town. I’m known for my cucumber sandwiches. My recipe was even printed in Net News,” Butler recalls. She is notorious for always entering the Net News contests, and in fact, she has won twice. One included a trip to the Family Circle Cup when it was played in Hilton Head, South Carolina. She also won a pair of tennis shoes. “I still have those tennis shoes, so I’ll sometimes wear them to work in the yard.”

Butler says ALTA has been such a big part of her life. “There is nothing quite like ALTA. It’s such a unique organization where you make lasting friendships.” Some of those friendships include her fellow volunteers. Bert and Sadie Ardonyo have been ALTA volunteers for 43 years. “We’ve been friends with Joyce since she started as a coordinator.” They served on the ALTA Executive Committee when she and Charlie (her late husband) were Mixed Doubles Vice Presidents. “I [Bert] nominated Joyce as an elected member of the first ALTA Foundation. It’s been a pleasure being Joyce’s friend for the 40 years she has been involved with ALTA.”

Known for her impressive moves on the dance floor, Butler’s former colleagues still are in awe of her moves. Former Mixed Doubles VP Kirsten Sykes worked with her in both the Thursday Women’s and Mixed Doubles Leagues. “I have always been in awe of her vitality, her knowledge, and her commitment to ALTA,” she said. “I will miss seeing her at ALTA events, but trust she will continue to dance to her favorite music and enjoy every day with those she loves.” Longtime coordinator Lori Gangwisch also served in both the Thursday and Mixed Doubles Leagues with Butler and echoes that sentiment. “She is who I want to be when I grow up. Continuing to play tennis, dancing, volunteering and learning new things as the years went on are only some of the reasons I admire her so,” she says.

Everyone with ALTA is wishing her all the best as she will be greatly missed. “Joyce was one of the first people I met at ALTA and was so kind to me as I learned the ropes. She is a joy to be around and is always so kind to others. We will greatly miss her in each season, but wish her the best in her retirement from ALTA,” says Cameron Turner, 2021 Mixed Doubles VP.