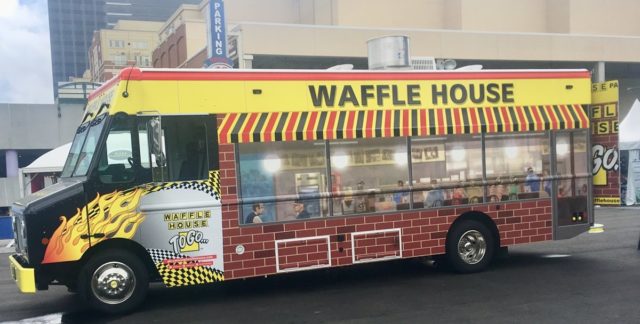 The Truist Atlanta Open recently partnered with CIGNA and Waffle House to feed some of metro Atlanta’s frontline healthcare workers at Northside Hospital Cherokee. For two days in mid-April the team brought a Waffle House Food Truck to the hospital to feed staff.

“Northside Hospital and Waffle House are two of our key partners, not only during the nine days of the Truist Atlanta Open, but throughout the year,” said Eddie Gonzalez, Truist Atlanta Open tournament director. “They, like many others, are being affected by COVID-19.

“We’re not just a tennis tournament, we’re a major community event,” added Gonzalez. “We have tremendous community partners, and they have stepped up in critical times. It’s our way of doing something to help support Northside Hospital and those hero frontline healthcare workers, along with our great partner Waffle House who is being hit through this as well, with all of their stores being closed other than take out.”

With the merger of BB&T and SunTrust Bank, the BB&T Atlanta Open has now become the Truist Atlanta Open as the popular Midtown Atlanta event celebrates its 10th Anniversary. This year’s event still is scheduled from 25 July to 2 August.

In addition, the tournament’s charity partner, Giving Kitchen, was one of nine charitable causes to receive a $15,000 ATP ACES for Charity grant this year. The ATP 250 first began working with Giving Kitchen in 2017. Giving Kitchen provides emergency assistance to food service workers through financial support and a network of community resources.