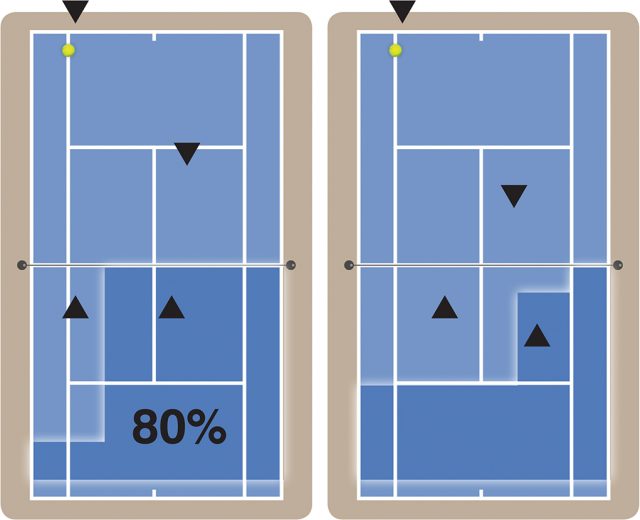 The Gigi Fernandez Tennis Method — The Gigi Method — is a way of learning to play great doubles. It’s based on my experiences as both a world-class tennis player for 15 years and a coach to Grand Slam champions, as well as thousands of hours spent as an instructor working with recreational players of all skill levels.

Let’s start with a basic premise many of us learn very quickly once we begin to compete: Tennis is a game of errors. This holds true even at the highest levels of the game. At the 2012 Wimbledon and US Open, more than 70 percent of the points played in the men’s and women’s singles events ended in an error. If such is the case among the best players in the world, it’s safe to assume that recreational players would be well-served by committing fewer errors — and, even more pointedly, figuring out ways to force opponents into making them.

The main key to how The Gigi Method will help you, which differs from any other doubles books, manuals or DVDs that are available to tennis players, is by teaching you how to eliminate 75 percent of the errors that you make.

Wouldn’t you want to learn how to eliminate positioning, shot selection and tactical errors and only have to worry about execution? This simple, yet complex concept helped me become one of the best doubles players in the history of the game.

Here is one example of how correct positioning can instantly make you a better doubles player:

Following the Ball
Following the ball is one of the fatal mistakes doubles players constantly make, which leads to positioning and coverage errors. I have seen this so often over my years of coaching recreational players, at all levels, in all parts of the globe, that I am declaring it an epidemic. Yes, I know that many people are taught to play this way in singles — that you follow the path of the ball and are therefore able to bisect the angle of shots your opponent might hit.

But, in doubles, this is a bad habit that is pervasive and poisonous. Following the ball often places players squarely inside the blended line of the 60-foot court and even inside the alley. I have witnessed thousands of recreational players follow the ball and become so preoccupied with covering the alley that they force their partner to cover 80 percent of the court — that is everything from the middle to the crosscourt to the lob.

Good doubles players do not follow the ball. They do quite the opposite, constantly moving to the middle, trying to cut off the middle ball and pressuring opponents to hit the low percentage down the line shot. This is a fundamental distinction of The Gigi Method versus other less successful ways to cover the net.

But for the most part — and I’m talking more than 90 percent of the time — you should not follow the ball. There is no way we should ever create a situation that forces our partner to have to cover 80 percent of the court (above left).

The graph (above right) represents a far better way to cover the court. My partner is responsible for their half and is taking the middle balls from me if they are closer to the net, while I stand back and cover for them if they can’t get middle balls or are lobbed.

Doubles champion and Olympic medalist Gigi Fernandez will conduct a tennis boot camp Nov. 11-13 at Georgia Tech. Learn more about it and about having her conduct a clinic at your club by visiting gigifernandeztennis.com.