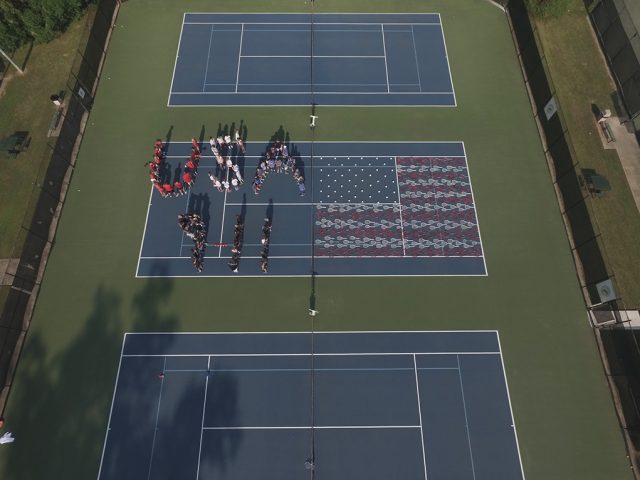 In an effort to honor the men and women who lost their lives Sept. 11, 2001, a local tennis pro and his students created a visual tribute using tennis equipment.

David Drew, a local pro who founded Universal Tennis Academy in 1996, remembers where he was the day the Twin Towers in New York City collapsed, the Pentagon in Arlington, Virginia, was hit and the brave men and women on United Airlines Flight 93 took over their plane and crashed it in Stonycreek Township, Pennsylvania, so that it didn’t crash it into another structure. “When I first heard about it, I was driving into the club, but it didn’t even make me turn on the news at first,” Drew recalls. “When the plane hit the second building, that’s when all of the coaches came off the court and we realized something was really wrong. We canceled every lesson for the day and all the coaches remained hovered around the TV at the club in disbelief.”

Last year, Drew had a chance to visit Ground Zero for the first time and that is when, for him, it all became real. “It just blew me away. I spent all day down there, taking my time looking at all the different museums, landmarks, photos. … It kind of put everything into perspective what I saw 15 years ago. I didn’t lose anybody, and I didn’t know anyone who lost anyone, so it didn’t hit me personally that hard. … It was scary in a way, made me realize what a horrible tragedy this was.”

When it came to commemorating the 15th anniversary of the tragedy and honoring those who lost their lives, Drew wanted to do something special, but with a tennis twist. One night while lying in bed, Drew sketched a drawing of an American flag on a tennis court, something he wanted to re-create with the help of his students and staff. “It would be neat if we could use all different kinds of tennis equipment to create this,” he recalls thinking.

On Sept. 8, he and his students used almost 300 tennis racquets to create the red and white stripes, 200 tennis balls for the white stars and about 70 people for the letters and numbers, spelling out “USA” and “9/11.” Racquets used in the project were donated, and a majority of them will be refurbished and restrung so that Drew can use them for the inner-city tennis programs UTA hosts at Washington and McGhee tennis centers in Atlanta. A friend of the academy used a drone to take a photo of the completed tribute.

The two weeks leading up to the tribute, Drew started talking to his students about 9/11 and how it impacted everybody. “For most of the coaches, they remember where they were when 9/11 took place, but for all of my students, they either weren’t born or they were only 1 or 2 years old,” he says. “I wasn’t sure what they had learned in school regarding 9/11, but I learned very quickly that it wasn’t that much. There is still more focus on World Wars I and II and Vietnam, but not that much time has been spent on 9/11.”

Drew says students began watching documentaries about 9/11 and reading as much as they could about the tragedy. “In the days that led up to [the tribute], it was really neat to see how many students took an interest in it and wanted to be a part of it,” he says. “I didn’t know how hard or easy it would be to get that many people dressed in red, white and blue. And it was even fun for me to get my 2- and 4-year-old daughters involved, who came out with my wife. I think it’ll be fun for them someday to look back and see this.”

The tennis student who spearheaded most of the 9/11 project is 17-year-old Andrei Duarte. The senior, who is home-schooled and has played at UTA for seven years, says he was only about 2 years old on 9/11 and was living in Australia at the time. His family moved to the United States when he was 10 years old so that he would have more opportunities to play tennis competitively and potentially attend college on a tennis scholarship.

He volunteered to work on the project because he enjoys helping out at the academy as much as he can. It also gave him an opportunity to learn more about 9/11. “I had never really done anything to remember 9/11, so this was a big deal for me. I got to learn more about it and how it affected so many people. I think it was just awesome to be able to do this because we get to remember those who lost families members or died on 9/11,” Duarte says. He spent several hours spray-painting racquets red and white and helping coordinate participants with Drew.

“One of the best things to come out of the whole project is the fact that so many students really had a chance to research and learn more about 9/11,” Drew concludes. “As a coach, we can get caught up in just the tennis part of it, but we always talk about life skills and life lessons and there are so many life lessons to be learned from 9/11. It went much further than I expected it to go, and I was very proud of all of my students for really doing that extra work to learn more about it.”