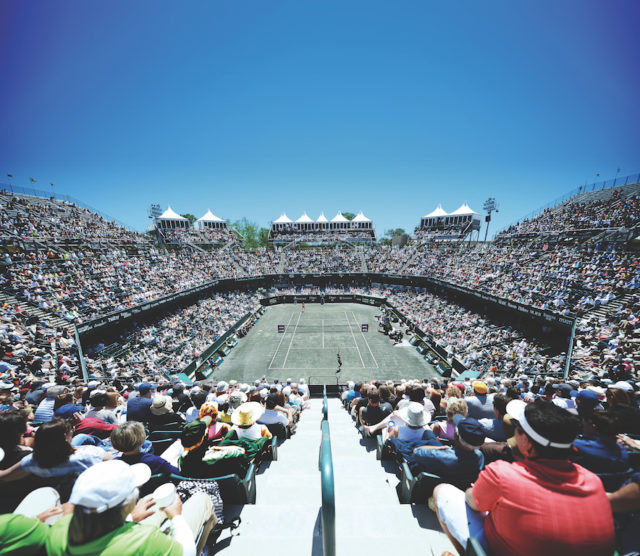 Every year, the WTA clay court season kicks off in Charleston, South Carolina with the Volvo Car Open. In fact, this is the only women’s event on clay in the United States, and the tournament (formerly known as the Family Circle Cup) has a rich, 45-year-old tradition of drawing top players and helping younger players gain notoriety. Net News spoke with tournament organizers to find out how they attract the best players, and how they continue to improve the fan experience.

Tournament manager Eleanor Adams is responsible for recruiting players for the Volvo Car Open which is March 31-April 8 this year. She stays in touch with the players all year, following their progress through other tournaments as well. She works to make sure they know they are welcome in Charleston. Of course, getting players into the draw is just half the battle; once they’re in Charleston, Adams works just as hard to make sure they’re well taken care of. “It’s a relationship – to make them feel at home, wanting to come back to the Volvo Car Open,” she says.

Some of the typical perks players receive include laundry service, transportation, special food/meals and, more often than you might imagine, Adams and her staff find themselves tracking down specific racquets and shoes because a player’s luggage was lost. “Anything that makes them or their families comfortable being here. We rarely say no,” she says. “We try to keep them happy so that when they get out on the court, they can do their job.”

There are times when Adams gets creative in helping players feel welcome. She has helped arrange birthday parties for players. And she once helped to organize a baby shower when she learned a player was three months pregnant. “[The player] was totally surprised. Her first professional tournament was the Family Circle Cup [now the Volvo Car Open], and she wanted this to be her last professional tournament. … We had a wonderful baby shower in the player lounge.”

That level of dedication and support can be seen in the fan experience as well. Special events are scheduled throughout the tournament, including the PowerShares Series (a competitive tennis circuit featuring legendary icons and world-renowned champions), a “Doubles & Bubbles” lunch every day, a women’s empowerment lunch, live music all week, and the Ace Lounge for weeklong ticket holders. It’s all about continuing the tradition of providing a great fan experience, says tournament director Bob Moran.

Moran wants to make the tournament a memorable experience for kids, too. Through the Volvo Car Open’s partnership with SunTrust, the tournament provides free entry for anyone under the age of 18. And through a partnership with USTA, the Open provides tennis clinics and other activities for younger fans. “We’re really excited for what Net Generation brings to the table for kids,” Moran says.

Fan support is just one measure of how programs such as this pay off for the tournament. Another way, Moran says, is increased participation in local tennis leagues among Charleston’s youth. In his 18 years working at the tournament, Moran has seen the popularity of the game explode in Charleston. “The growth of community tennis has been extraordinary. … And the growth of junior tennis has been extraordinary. The amount of junior academies that are active in this market with high-level junior players is pretty awesome,” he says.

This year, Moran expects 85,000 to 95,000 fans from all over the country. “I do attribute that to our partnership with Tennis Channel. It has been important to us because tennis fans know the Tennis Channel,” he said. Tickets are available on the Tournament’s website – volvocaropen.com – and there are group packages available for teams, including ALTA teams. Just call the ticket office for more information at 800.677.2293.