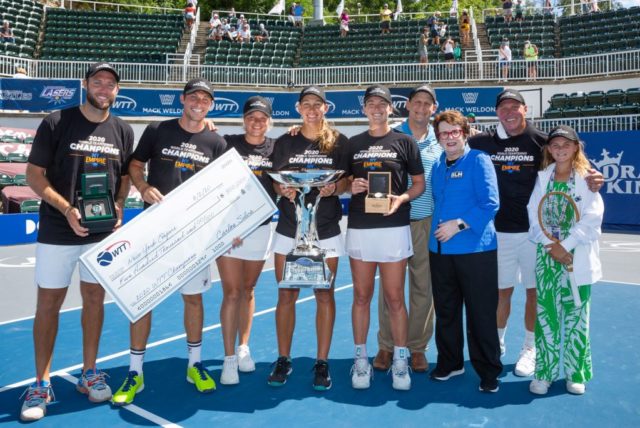 Tennis rock stars: How was your summer? Can you believe the US Open already is upon us? The Open marks the “finish line” for the majors in the calendar for the pros. During my pro tour days, my siblings and I would play World Team Tennis and build confidence through the U.S. summer series of events, hoping to peak at the end of August just in time for the US Open. I always felt Wimbledon was the half-way point for the calendar year with the Open and a proving ground for my entire mental and physical talent. It was my last chance to add a major to my trophy case for that year while getting a great lift from the American fans.

Fire up tennis maniacs! I hope you have had as great a summer as possible given the global situation that seems to change from day to day. As for me, my summer was as good any I’ve had in my life. The challenges we all face were there, but the opportunity I had to be part of the 45th season of World Team Tennis (WTT) was life-affirming. I am the coach of the WTT NY Empire, one of the nine franchises around the country. It is an honor to be coaching with and against the best players in the world — the NY Empire alone had Hall of Famer Kim Clijsters. Venus Williams and the Bryan Brothers also competed. The 2020 Aussie Open Champion, Sofia Kenin, participated as well.

Normally, teams travel to the various WTT cities to compete — and that travel can be the toughest part. Competitors could play a match until 10:30 p.m. and then try to wind down by midnight before taking a 6 a.m. flight to the next city to play around 7 p.m. that night. Do that for three weeks straight and by the end — even if you win — you are one exhausted puppy dog.

This year, the entire season with all nine teams was played at the Greenbrier Resort in the great state of West Virginia. Everyone in the WTT bubble was tested constantly. Just to get into the bubble, all players and coaches needed double-negative test results. Then, once in each week we were all tested to keep everyone safe.

How long have I been writing the Jensen Zone, and now I’m talking about double-negative tests? That is the new normal for now, and all the players were so grateful for the opportunity to compete and to have an opportunity to prepare for the US Open.

One thing I have seen in recent weeks is an uptick in tennis. The natural social distancing has made our game more attractive to new players around the country. More players are jumping into leagues and even new teams are forming. It’s nice to see people jumping on a court and maybe just for a little while being able to think about something else, something fun. Even if you can’t take to the court, there are ways to improve through the millions of online tennis tips. Take practice swings and find a wall to hit on. Just keep finding ways to improve your game.

This fall, make a commitment to your weakest shot and study ways to improve it. Please be safe and keep going for the lines!