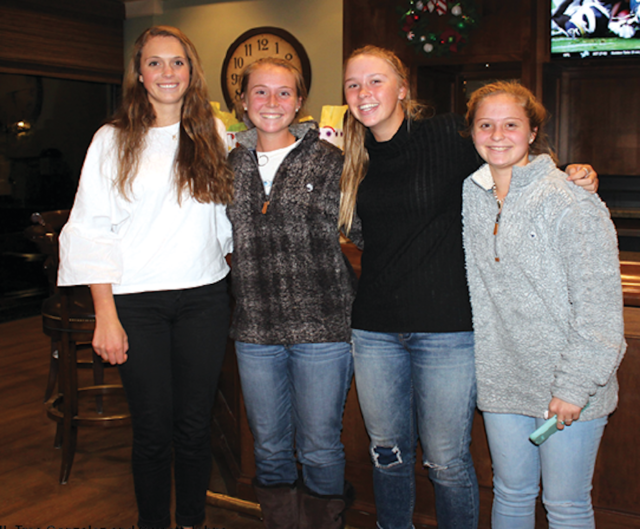 Among the top 10 girls were Samantha Hogan, Jessie Young, Caitlyn Munson and Jada Young, from left. They and other players were recognized at the JCL year-end banquet.

The ALTA Junior Challenge Ladder completed a rock star season in 2017. The challenge matches began at the end of August and continued until early December. More than 1,000 challenge matches were played by 124 boys and girls. The ladder managers kept up with the challenges, results and ladder movement with shared spreadsheets that they put together – one for the boys’ ladder and one for the girls’ ladder. It takes a village to run the Junior Challenge Ladder!

I had five able and hardworking managers using their phones, email and text messages to communicate and schedule all the matches and keep the ladder moving. Our final standings were listed in the January/February issue of Net News. The next article will feature our five graduating high school seniors. We will learn what inspired them for tennis and what their plans are for college and tennis next fall.

The season for the ladder has changed to one extended season during the autumn months when the weather is better and major tennis tournaments are fewer. Previously, ALTA held a fall season and a winter season for the ladder. It was difficult to schedule and play tennis matches with cold and unfriendly tennis weather in January and February. Also, many players are getting ready to play spring tennis, baseball or track on their school teams.

The Junior Challenge Ladder was very dynamic in the fall season. With over 50 players on each ladder, the positions were constantly changing as players would challenge “up” the ladder in order to improve their position and be rewarded with more competitive matches with stronger players. Please come see our top 10 players on the court at the BB&T Atlanta Open in July. They will be recognized on Center Court during ALTA Day.

Besides the top 10 boys and girls, ALTA recognized five additional hardworking players with ladder manager awards. These players were selected as standout individuals who exemplify the ALTA creed of sportsmanship and fair play. They followed the rules for making and receiving challenges. They were on time with their communications to each other and to their managers. They complimented their opponents sincerely no matter the outcome of the matches. They completed 12 match credits without a problem. I was proud to recognize each of them at the awards banquet with an ALTA blue hoodie. The award winners on the boys’ ladder were Jack Sorel, Jordan Winfrey and Robert Bauer.

Brenda Maddaleni had trouble selecting her award winner as so many of the boys at the top of the ladder were good sports and hardworking tennis players. However, Jack Sorel stood out as a great competitor and always reported his matches promptly to his manager. Jack has been a welcome player on the boys’ ladder since 2012, and we will certainly miss him next season when he goes to college.

Jordan Winfrey was the best communicator from the middle of the boys’ ladder, according to Freddie Lawrence, his ladder manager. More than any other player, he diligently reported on his matches and always gave full credit to his opponents no matter the outcome.

Robert Bauer earned three wins in a row exactly three times during the season! Robert’s hard work moved him up the ladder seven spots by the end of the season. Congratulations to him.

The award winners on the girls’ side were Samantha Hogan and Melissa Tamayo. Manager Heather Keisler chose Samantha Hogan. She started and finished the season in the top 10 and completed all 12 matches without a single round robin, which provides a “fun” match credit. Samantha accomplished this while playing 10 different girls. This is remarkable because some of the girls tend to play the same opponent several times. Honorable mention goes to Kate Sharabura, who is also a very conscientious player on the ladder: polite, friendly and cheerful.

Melissa Tamayo’s opponents always mentioned her great sportsmanship to her ladder manager, Patricia Winfrey. “Even though Melissa completed her 12 matches in October,” Winfrey said, “she still made herself available to play matches and attend all Junior Challenge Ladder round-robin events. She was very diligent in responding to challenges and reporting her scores.” I must also mention that Melissa lives in Douglasville and traveled many miles to play her matches.