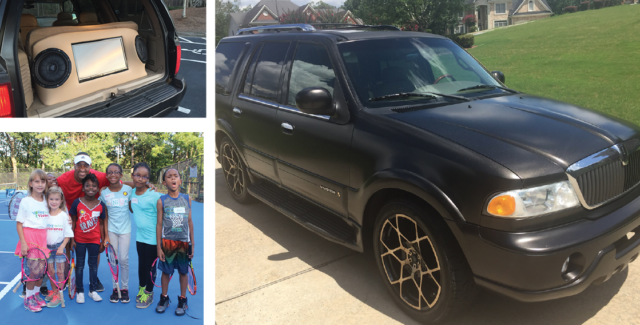 Lamar Scott is getting a lot of attention these days. Recently, he earned four awards from well-known tennis organizations. But those awards are not likely to garner the most attention for Scott. That will come via the NFL Network.

The backstory: Scott, a 17-year season ticketholder who attends every home game of the Atlanta Falcons (and some away games), figured out a way to use his tailgate gatherings for charity. He invited people to bring their Toys for Tots donations to him on game day. He filled his Lincoln Navigator the first year. Since then, Toys for Tots has sent a truck to handle the load.

Falcons linebacker Vic Beasley heard about the holiday toy drive and recommended Scott for “Tackle My Ride,” a reality show that takes the vehicle of a deserving fan and refurbishes it (although “refurbish” is a bit of an understatement).

Scott knew he was under consideration, but unaware he had been chosen until former Pittsburgh Steelers linebacker LaMarr Woodley and celebrity mechanic James Torrez showed up at his front door. He allowed them to tow his 2001 Navigator, which had more than 210,000 miles, to Demented Customs in Hobbs, New Mexico, where the crew went to work fixing it up. If you want to know all that they did, head over to YouTube and search for “Tackle My Ride Atlanta Falcons.” It’s worth the view. 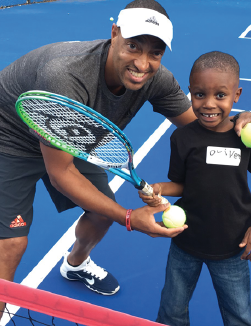 Now Scott has a slick, sleek ride as he heads to work and to his many volunteer commitments. Scott, a 25-year, full-time employee in the human resources department at the Centers for Disease Control, also is a certified teaching pro with the Universal Tennis Academy and a volunteer at Special Olympics Georgia, Volley Against Violence and an international wheelchair tournament held annually in Hilton Head, South Carolina. He also is an overall coordinator for ALTA’s Men’s League.

Those are the efforts that won him recent accolades. USTA presented him with state and regional awards in January for promoting the game of tennis. The Professional Tennis Registry honored him similarly at its February meeting. And, he was recognized at ALTA’s annual meeting last fall for 10 years of volunteer service to recreational tennis.

“Tennis is very therapeutic,” Scott said. “It’s good exercise, and you’re outside doing something you love.”

And it’s not a bad way to fill the time while waiting for the next Falcons season to start.