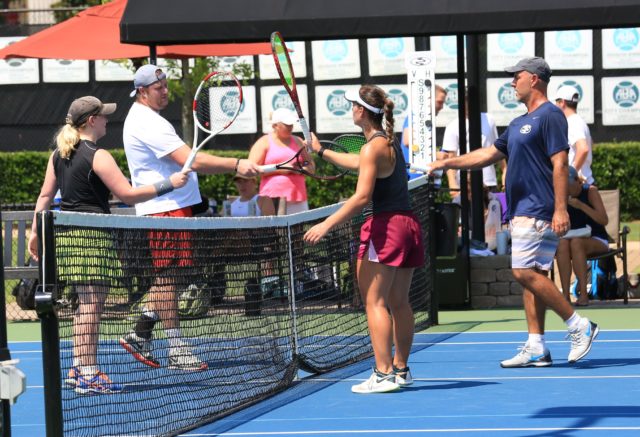 ALTA prides itself on the camaraderie and strong, long-lasting friendships that result when people come together to play on a team. We truly have a unique league concept, and we hope as we continue to deal with the challenges of the pandemic that we can keep the important aspect of the social ALTA connection. Just as important is maintaining high levels of sportsmanship while either playing or organizing matches.

We want to hear from you. If you have someone you would like to nominate for a sportsmanship award, send an email to your coordinator or league vice president. You also can find the nomination form on our website (altatennis.org) under ALTA Documents>Sportsmanship Award.

Due to fall break, our availability was minimal. Of the available players I had, most had played at the lower lines. Movement rules were preventing us from being able to put together more than two legal lines. There were two players available to play Sunday morning at line 3. That would have allowed us to have four lines for the match. I called Dana and told her our situation. Even though she was pulling together makeup matches from the week before, she readily agreed to ask her team if anyone could play Sunday morning. Sheri and Kathryn, two players, agreed to play and Dana let me know early the next day. Seven Hills could have easily taken the three points. They showed great sportsmanship, and in the true spirit of ALTA, they wanted to be on the court. It was a beautiful day, and everyone had fun matches. Seven Hills won the match, but we were all appreciative of the great sportsmanship they exhibited by agreeing to play matches early to accommodate us.

I would like to nominate the players of my team who played City Finals this year. The City Finals is a lifetime opportunity for any player, especially young juniors. The road to the City Finals was not easy. We started last season as a team, and we were last in our division. This season, we worked extremely hard and practiced more often. We won our division by 1 point. It could have been luck, but maybe our hard work secured our spot. We were crushed in the City Finals; however, we never gave up, and we played every game honestly and solid. We fell down but managed to get up and continue play. We played hard even when we were down. We never gave up.

I am nominating Elisha MacEllan and her team from Chimney Springs for the ALTA Sportsmanship Award. Before the ALTA schedules were released, I knew I had an availability issue one of the weeks during the season. As soon as I knew the opponent for that week, I contacted her with my situation. It was a school fall break. Without any hesitation, Elisah understood my dilemma and was so gracious to work with us. She certainly did not have to do it. We thanked each of her players and found they were all just as accommodating as their captain. She simply believed it was better to win on the court than to just take a win due to a default.

Unfortunately, a former teammate of ours lost her battle with cancer and passed away. Her funeral was scheduled for Sunday, October 24, at 2:00 p.m. I was made aware of this the afternoon of Thursday, October 21. I reached out to Alex and explained our situation. I was hopeful that we could a least play 1 or 2 lines early.

We did not want to default the entire match. Alex was understanding, and her team went above and beyond to accommodate our situation. We were able to play every line. It is important to note that we were tied with this team for first place. Clearly, it was to their advantage not to play lines early. That would have ensured a win for their team. Alex and her teammates are a perfect example of good sportsmanship.