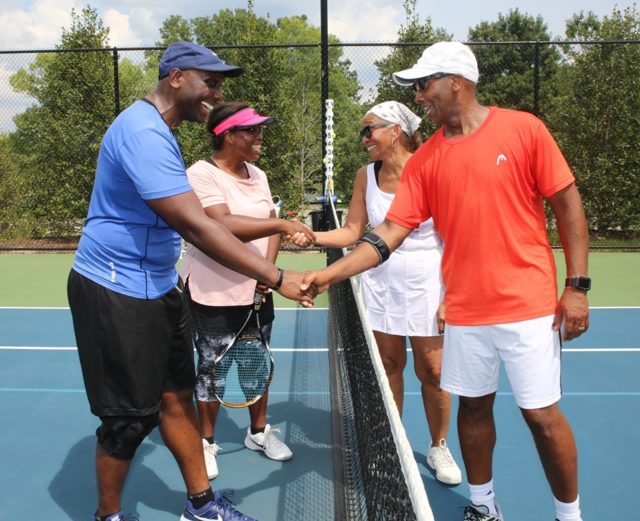 ALTA prides itself on the longstanding tradition of good sportsmanship during all aspects of league play. We love hearing from our members who take the time to share stories of their opponents going the extra mile on and off the court. ALTA rewards these acts of kindness with sportsmanship awards. Here are a few of the stories of our sportsmanship winners from previous ALTA seasons.

Sandy Springs Tennis Center
Mixed Doubles A7
Captain: Roberto Bazzani
Player: Hope Jensen
Nominated by Shelly Wilson, captain at Rockdale Tennis Center
We were having a hard time putting together a lineup for our match against Sandy Springs Tennis Center. I was going to have to default three lines. We were short players for the week. Hope, as co-captain, went above and beyond to help us arrange the matches so we would not have to default lines. Not only was Hope so helpful, but the entire team was willing to adjust for us to complete the matches. Hope stepped up to manage the team while the captain was not available. What adds such great sportsmanship to this situation is they were in first place, just one point ahead of us. I wish more teams could demonstrate this outstanding sportsmanship.

Oxford Mill
Mixed Doubles B1
Captain: David Nesselroad
Nominated by: Aurobindo Sundaram, captain of Cambridge
I would like to nominate David Nesselroad, captain of Oxford Mill. Preparing our lineup for our match with Oxford Mill, we had limited availability. David knew this. Instead of taking the points, he tried his best to schedule some lines early. We played one line early, and he worked with us on all the other lines. The match was sporting, friendly, and easy to play against. All in all, Oxford Mill is an example of how ALTA should work, and David is the epitome of the right ALTA team captain.

Highlands at Hamilton Township
Senior Mixed B7
Captain: Craig Page
Nominated by Barbara Stahura, captain of Smoke Rise Country Club
I want to give a thank you to Craig Page. He was very kind as the host of our playoff match. In addition, he went above and beyond when one of our team members left their tennis bag at the match. Craig reached out to me to identify the owner and met me in Tucker to drop off the bag. He said he was out this way a lot, and he could save my teammate the drive back to Kennesaw! These are crazy, and at times, contentious days, but Craig restored our faith in the potential for kindness.

Wyngate South
Mixed Doubles B5
Captain: Meredyth Johnson
Nominated by: Pat Kinder, captain of Country Walk
Since it has been so hot, both teams agreed to start the matches at 8 a.m., an hour earlier than scheduled. We could provide three courts. Both teams were notified of the new start times. Wyngate South showed up on time ready to play. Unfortunately, our line 3 missed the information of the new start times. They could not be at the courts by the 8:20 default time. Instead of taking the automatic default for line 3, and the forfeits at lines 4 and 5, as they were entitled to, their team agreed to wait on the players to arrive and play the matches. Not only was this extremely generous on their part, but it should also be known they were in first place going into the match. Meredyth Johnson and the rest of the Wyngate South team exhibited great sportsmanship on and off the court!