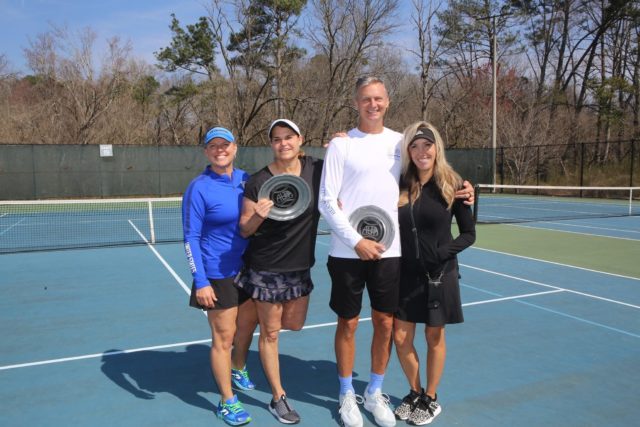 Many of us feel a bit of a shock when we are first referred to as “senior citizens,” but ALTA tennis looks at this title as something with which to promote and have fun! ALTA allows members who are 45+ the opportunity to step away from the 20-something “hard bellies” on the court and step into a more relaxed match with others of a certain age.

We’ve wrapped up another sizzling season of Senior Men’s and Women’s tennis, and yes it was HOT! Many thanks to all the teams who worked together to get matches in despite the heat. High temperatures are something we deal with every year in the Atlanta area, and ALTA does understand the toll it can take on players. We strongly encourage playing a third set tiebreak in lieu of a full third set so players can get off the courts quicker. We allow matches to be played early. We allow players to wait an hour if the temperature is above 95, and fortunately, since we play in the evenings, the temps are almost always within range as the sun goes down.

Now that the summer City Finals have been played and the champions have been celebrated, it’s time to look ahead. What can help you fill the winter months — after the holidays are gone, and spring isn’t quite here? Tennis, of course! The ALTA Senior Mixed league will be here before you know it. Registration begins September 20 and ends October 15. Play begins in early January, with City Finals taking place in March.

The Senior Mixed league is a bit different from other ALTA leagues. You only need 10 players (5 men and 5 women) to turn in a roster. Each week’s match is played on Saturday morning at 10:00 a.m. and consists of one line of men’s doubles, one line of women’s doubles, and two lines of mixed doubles. This format is much-loved by those who have played it, as it allows teammates to play the kind of tennis they enjoy most. This league offers all levels of play — from AA to C.

ALTA would love to see the Senior Mixed league grow, so talk to your 45+ friends NOW and get a roster together for the 2023 season. It’s a great way to keep the dust off your racquet before spring!