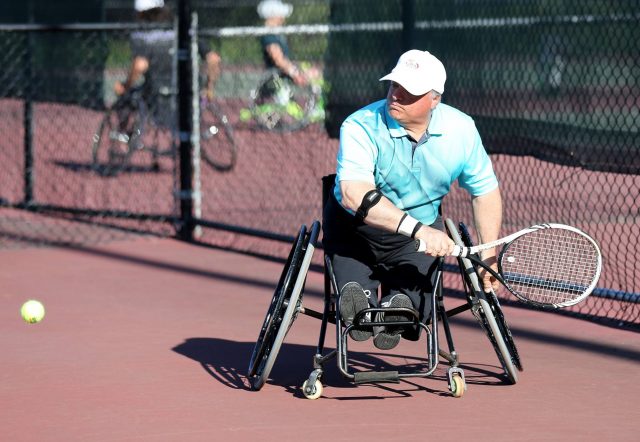 Even though the ALTA Wheelchair League is the smallest in population that ALTA sponsors, it may be the most diverse group of athletes.

On Tuesday evenings, at the Hudlow Tennis Center, wheelchair players from all over the Atlanta area, and even as far away as Chattanooga, Tennessee, get together to compete in ALTA League play. The reason we draw from such great distances is the population of wheelchair players compared to all other ALTA players is considerably smaller, yet this league is much larger than similar leagues in other parts of the country.
If you are not familiar with Wheelchair Tennis, all rules are the same except players can play the ball on the second bounce as long as the first bounce is in.

On almost every ALTA team, there are weaker players (usually the line 5s) and stronger players (lines 1 and 2). Wheelchair tennis is no different. We have players that compete successfully in other leagues (ALTA, T2, etc.). They serve hard, they return hard, and place it where you aren’t. We also have players that are just getting introduced to the game. I’ve had the satisfaction of watching some players who were introduced to wheelchair tennis last fall improve dramatically during the spring season.

Tennis is a challenging sport that takes a lot of practice to become a good player. I live in an active 55+ community. I’ve watched people who have never played pickleball become proficient in a very short time; not so with tennis. It takes a lot more movement to cover the court, more effort, and practice. While you’re learning the basics of the game, try mastering the game in a sports or tennis wheelchair (to get an idea of how many different types there are, google “court chairs”). Our members provide free clinics to help new players develop and current players tweak their game to become better and more competitive.

I used to swim competitively as a Masters swimmer (a special competitive class of swimming for those 25 years and older). Other than the grueling workouts, what I enjoyed most about the sport was the camaraderie. That’s what I see every Tuesday evening at Hudlow Tennis Center during our league season. I encourage you to come out to watch these players compete. We have a summer and fall Run ‘n Roll doubles league in which a “Run” player pairs up with a “Roll” player. Look for more on that in an upcoming issue of Net News.

How do our players compete against other wheelchair players from around the country? In April, Henry County again sponsored the America Wheelchair Tennis Championships, attracting nearly 75 of the best letter division players from around the country. Many of our league players participated. We had a great showing as two of our players finished first in their division, while seven were finalists, and three more were semi-finalists.