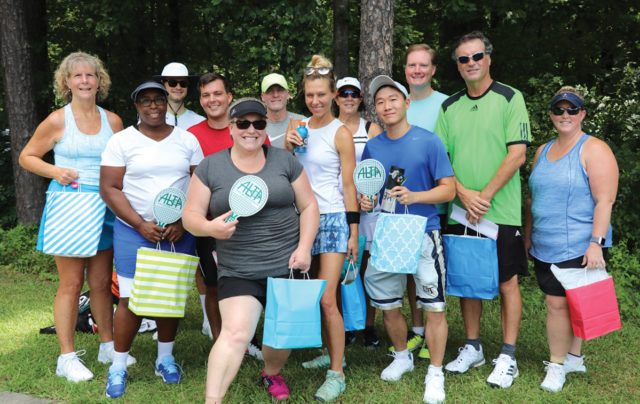 The players displayed excellence in the areas of talent, grit and outstanding sportsmanship. Each team was comprised of a man and a woman at least 18 years of age and an ALTA member in good standing.

Thirty teams participated in the event and were grouped in high and low levels for A, B and C divisions. With the split within each division, every team had an equal opportunity to win the division title. Play consisted of two rounds of six-game pro sets. Each division had champion and finalist teams, and each team received coveted tennis ball trophies.

We look forward to seeing everyone in a few days at the Fall Senior Mixed Doubles Mixer being held at Bitsy Grant Tennis Center.

JCL Players Are Up to the Challenge
BY DONNA GILLI, JUNIOR CHALLENGE LADDER VICE PRESIDENT 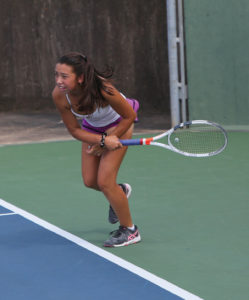 The 2018 ALTA Junior Challenge Ladder kicked off on a beautiful day at the end of August at Sandy Springs Tennis Center. Twelve courts were donated to ALTA for the JCL players to use for fun match play.

More than 50 players and their parents were on hand for some social tennis, snacks and catching up with each other after a long summer. The parents were invited to learn about the ladder and ask questions of ladder managers Patricia Winfrey and Brenda Maddaleni, and the JCL vice president.

The girls’ ladder and the boys’ ladder are now underway with more than 100 players. ALTA proudly has some of the best junior tournament players in the Atlanta area competing on our ladders. The season runs 14 weeks total, ending on Dec. 7. There will be a banquet and awards ceremony in early December to finish the year. The 2019 ladder will begin registration at the end of next July and the ladders will open again next August.

We celebrated the 2017 ladder season this summer by introducing the top 10 boys and girls on center court at the BB&T Atlanta Open on ALTA Day.

Earlier that same day, more than 20 JCL players enjoyed a tennis clinic with Wayne Bryan on the BB&T Atlanta Open practice courts. Many of the clinic players were some of our younger members from the ladder getting a taste of the tournament scene. We were thrilled to see John Isner, Ryan Harrison, Frances Tiafoe, Hyeon Chung and other pros who were warming up on the adjacent courts.

Mike Bryan also stopped by our clinic to help his dad with instruction. He offered the ladder players his best advice and allowed all of us a chance for autographs and pictures. Bryan says he believes doubles play is the best practice to improve volleys and to quicken reflexes.

Despite begin busy with school this fall, hundreds of matches already have been scheduled and played. We have implemented tennis software this season that has streamlined the process of making and receiving challenges. I have heard of great sportsmanship among players accommodating others who needed to play at a certain time or location to fit tight schedules. Most players will complete 12 challenge matches during the season, plus participate in JCL events and round robins.

Many parents have offered compliments on what a nice group of young players we have on the ALTA Junior Challenge Ladder. This keeps me busy sending T-shirts and prizes to players who have completed certain requirements or who have gone “above and beyond” in sportsmanship – a very good problem to have! Keep up the good work, and I will see you on the courts.