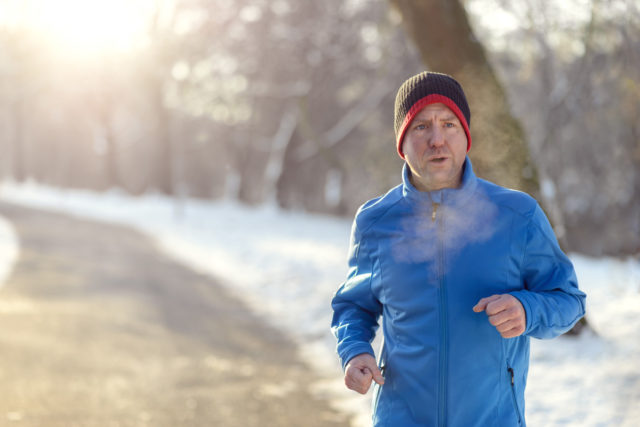 Tennis stars, the cold months are upon us and it is time to make sure our tennis skills do not go into a deep freeze. I always found cold conditions could be a weapon when I walked on the court. I grew up in the small town of Ludington, Michigan. With no indoor tennis opportunities near me, most of the year included cold, outdoor tennis. It was an advantage for me when playing against the indoor players who had it nice and cozy. Just a few things made a big difference.

For me, warming up with a jump rope or a short jog was an advantage. My opponents who were used to walking straight on the court to play usually took a full set to warm-up. I had a practice swing routine from groundstrokes, volleys, overheads and serves. Before I even stepped on the court, I had performed every shot I was going to do in the match. I would visualize hitting perfect shots and committing to the swing.

Have you ever evaluated your warm-up routine? Have you looked at other ways to improve your approach to preparing your body to match your game demands? These days, I spend a large part of my player development process on a smarter approach toward the player looking to get more performance out of their talent. I have found that the mental and physical warm-up is sometimes non-existent! So when you get a chance, evaluate your process. A new approach may just help you get off to a quicker start in your matches.

Now I must address the 2018 US Open Women’s final. The last time such a massive tennis moment turned upside down was McEnroe vs. Nastase in the 1979 US Open. Find that match on YouTube; wow, did things get crazy! Mac had nothing to do with it.

I had one of the best seats in the stadium for what was about to go down in that memorable women’s final. I was covering the title match courtside, just beneath the Williams family and friends box. My assignment was to provide sideline perspective to the USTA World Feed that is broadcast to 186 countries.

I was in the very same position for the two men’s semifinals. My perspective was underneath the Nadal and the Djokovic boxes. As many of you know, the entire women’s singles finals match started to unravel when chair umpire Carlos Ramos gave Serena a warning for her box coaching. In the men’s semifinals, all four players were being coached. I was at the US Open the entire three weeks (that included qualifying), and I saw coaching at every match. What I didn’t see was even one warning for coaching from any chair umpire until the Serena warning. As a former player, I can say with some authority that there are things the umpire shouldn’t do.

For example, the umpire should not call or over-rule the far sideline. The umpire should also not insert himself or herself into the outcome of a match. The coaching rule is never enforced; why the finals was the time to pull Serena over and give her the ticket (so to speak) is confusing to me. Ramos is a good umpire. He always has gone by the rulebook, but every umpire should know the players they are umpiring. You treat all players fairly, but not the same. Serena has a history on that court in big matches. She is a very passionate player. I believe each player deserves what I call a “soft warning” in the case of the coaching violation. The second code of conduct when Serena broke her racquet at 3-2 up in the second set is automatic. The final nail was the final code of conduct warning that ended up in a game for Osaka. Serena should have calmed down, but she never used bad language like she had in a past incident. Was she aggressive? Yes. Was her behavior over the line? I didn’t think it deserved a game violation in the finals of a US Open. Both Serena and Ramos have accountability in this match getting out of hand. Osaka played better than Serena on that day and deserved to win, but the match should not have taken that kind of twist of fate.

Once, I was fined $1,000 at Wimbledon for calling Doug Flack “Stick Boy,” and I thought that was uncalled for.

Competitive tennis can get the best of all of us. The Serena matches always are must-see because she is so charismatic. It makes the game so interesting when she performs. I have enjoyed hearing so many different takes on that match and because of that, the match will go down as one of the craziest in tennis history.

Enjoy your tennis and never call your opponent “Stick Boy.”