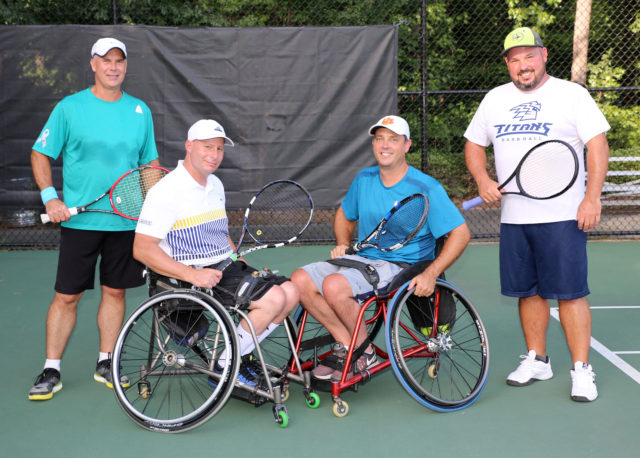 ALTA offers three seasons of wheelchair tennis leagues each year. Spring and fall are Wheelchair Leagues and summer is a Run ‘N Roll competition. If you are new to wheelchair tennis, the only difference in the rules is the wheelchair player has the option of two bounces to hit the ball compared to only one bounce for a standing player.

As the spring Wheelchair League winds down, we are gearing up for the summer Run ‘N Roll League that will begin June 7.

The spring Wheelchair League includes players of all levels from all over the metropolitan area. Open to men and women 16 and older, the league plays Tuesdays in spring and fall out of Hudlow Tennis Center in Norcross. Each season lasts six weeks followed by City Finals. The number of teams and lines played per team varies depending on how many players are registered each season. Players are matched against others of comparable ability, which creates a competitive and fun tennis environment.

ALTA is always glad to get input from members and, whenever possible, we work to create better ways to make the leagues successful. This spring, we are working on adding a wheelchair clinic program to the spring and fall sessions while advancing the skills of the more experienced members through practice and competitive play. The three-hour session would include one hour of working on skills such as serving, strokes, chair maneuverability, etc., while the other two hours would be match play. We hope to have this online for the fall season.

Summer Run ‘N Roll League says it all. A standing player is paired with a wheelchair player in doubles matches. Matches are based on players of comparable tennis ability. With the Run players only getting one bounce versus the Roll players getting two, this then requires the ultimate in strategy and finesse. The league plays Tuesday nights in the summer at Hudlow Tennis Center and is open to adults. Each season lasts six weeks followed by City Finals. The summer season runs from June 7-July 19, and the fall season runs Sept. 6–Oct. 18.

If you would like to join one of these leagues, go to altatennis.org and register. Drop me an email at specialprogramsvp@altatennis.org and we’ll make sure you get on the roster.  Hopefully, we will see you on the court for the next session!