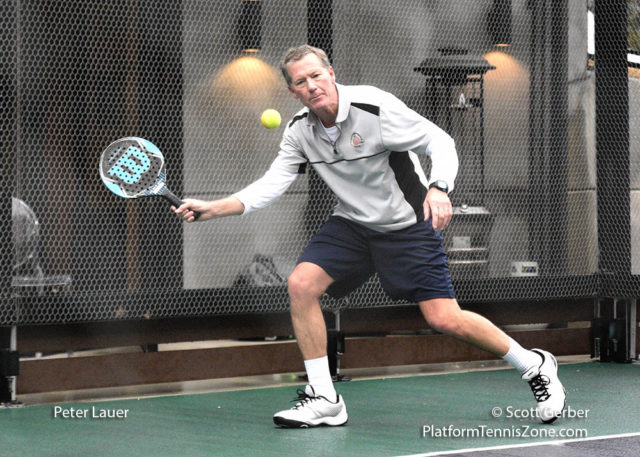 The 13th Annual Peachtree Invitational Platform Tennis Tournament, held in Atlanta Feb. 9-11, featured 124 players (men and women) from 13 states on 11 courts. Reflecting on this year’s event, Peter Lauer, founder of Peachtree Paddle, commented on the growth of both the tournament and the sport in Atlanta. “We started with two courts and 16 teams from three states, with a few volunteers and a party at my humble abode.

“Now with Freddy Goldenberg as my terrific co-chair and some 28 volunteers, we’re able to host a first-class event, for both men and women, with a great reputation around the country, and to attract serious paddle talent with national rankings,” Lauer said. “The tournament’s growth mirrors the growth of the sport in Atlanta and around the South, which is our mission. We now have 14 courts, some 200 league players and estimates of 1,000 casual players.”

The opening night event at Bitsy Grant (Platform) Tennis Center saw Agata Cioroch and Lisa Teer defend their title over Goldenbert and Ewa Radzikowska. All four women are tennis players who’ve also embraced platform tennis. On the men’s side, it was an all-Charlotte finals, with Randy Lofgren and Nathan Crick defeating Eric Miller and Claes Persson.

Peachtree Paddle, which hosts the invitational each year and prides itself on “great paddle and great parties,” was true to form with courtside parties each day of the event, along with a Saturday gala for players, sponsors and guests. The gala, a fundraiser for a future public platform tennis site somewhere in Atlanta, raised nearly $5,000 toward the goal. Peachtree Paddle is seeking partners among public venues for the proposed courts. For more information, visit peachtreepaddle.org.