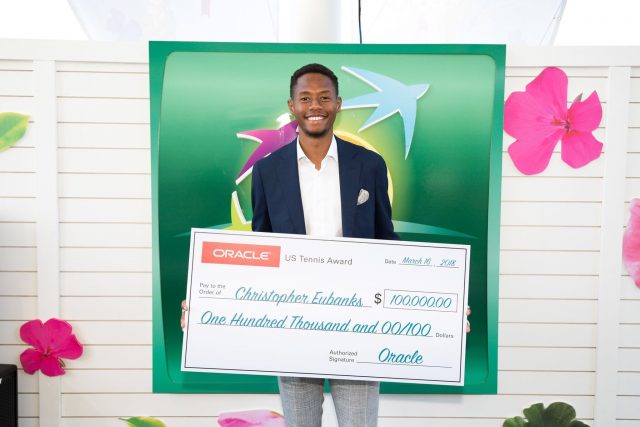 Presented in a ceremony at the BNP Paribas Open by Oracle, the grant is intended to assist young players as they transition from collegiate tennis into the professional ranks. Former Ohio State women’s tennis player Francesca Di Lorenzo also received the award.

“I truly can’t put into words how thankful I am to win this award from Oracle and the ITA,” Eubanks said. “To know that they believe in me enough to put this kind of financial backing behind me reassures me that I am definitely on the right path and further drives me to continue progressing day in and day out. This is truly a blessing, and I can’t wait to make good use of it.”

The Atlanta native and two-time all-American had an impressive three-year career at Georgia Tech, finishing with a career singles mark of 90-33 (37-17 in tournaments) and a 53-42 overall doubles record. While going undefeated at home in his final two years, Eubanks also became the first Yellow Jacket and just the fifth player in conference history to earn two ACC Player of the Year awards.

Eubanks is currently ranked 295 in singles play after turning professional last fall. After starting the year by making it to the semifinals of the ITF USA Futures in Los Angeles, he’s won his first-round matchups in each of his last five competitions. Most recently, Eubanks reached the quarterfinal of the Canada Futures tournament.