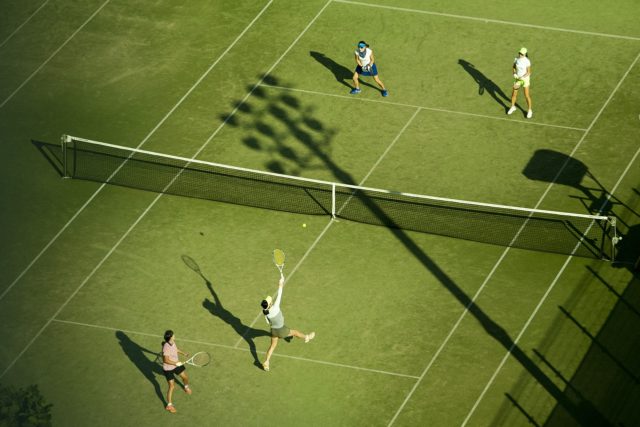 Time is valuable. Creating a practice that not only optimizes your time, but also prioritizes fundamental components of the game is paramount. Instead of adopting a “monkey see, monkey do” approach on the practice court, having a specific plan that purposefully addresses weaknesses while simultaneously improving strengths will undoubtedly yield desirable results. This article provides five practice “hacks” that will not only maximize your on-court training, but will provide you with a significant competitive advantage.

Think Outside the Box

When practicing service placement, most players place a visual target at a designated position inside the service box. While this is not incorrect, there is a significantly more efficient way to measure your serve’s accuracy and effectiveness by placing serving targets on the baseline. The critical factor to consider with service placement is not necessarily where the ball bounces in your opponent’s service box, but rather where the ball intercepts the baseline (this is where most returners stand to receive the oncoming ball).

For example, when serving to the T in the deuce court a player will often hit a desirable target within the service box, but due to unwanted spin imparted on the ball, it may end up crossing the baseline adjacent to where the opponent is positioned to return serve. A simple fix is to reconsider your targets and their placement. 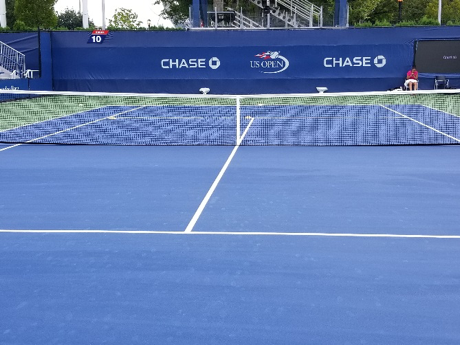 Placing a target on the baseline (seen above) will allow you to see the full effectiveness of your serve from the returner’s perspective while providing instant feedback.

To begin, position yourself on the service line and hit 10 serves to wide and T targets ensuring that your ball crosses directly over the cone placed in the service box and on the baseline. Once this has been successfully achieved, take two steps back and repeat the process. 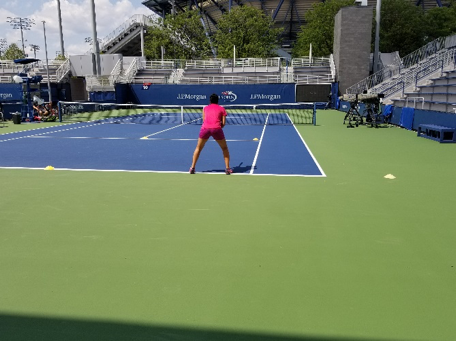 Continue until you reach the baseline, remaining mindful that an effective server can create a distance more than 15 feet wide for the returner to cover (seen above).

Not Knowing Is Best

A recent Sports Illustrated article written by Eric Butorac provided some keen insights on practice habits and how the best players in the world optimize their training sessions, particularly when perfecting the return of serve. Butorac, who achieved a career high doubles ranking of 17 in the world, described how he was summoned to the practice courts by Novak Djokovic at the US Open and was instructed to serve so Novak could work on his return in preparation for his impending match against Feliciano Lopez. Here is a short transcript of their conversation:

Butorac immediately learned a valuable lesson about practicing this crucial part of the game: Not knowing is best. The return of serve is one of the most important and complex shots in the game due to its specific split step and movement patterns, various spins and abbreviated swing. However, when training this shot most players begin by asking the server, “Are you serving wide or T?” Once this information has been divulged the effectiveness of the training becomes almost obsolete as players sacrifice the ability to train their anticipation, split step, movement skills and ball reading ability. As Novak wisely noted, at no point in a match do you get told where your opponent plans on serving, and this is what makes the return so difficult.

When training your return, ensure that you are oblivious as to where the server intends to serve. The server will also benefit from this kind of practice.

Using the “basket” is an excellent option for those attempting to improve technique, groove a certain shot or eliminate extraneous variables. However, many players and coaches become obsessed with basket drills as it provides them with a feeling of confidence and consistency. Unfortunately, this confidence and consistency is fake. Tennis is a game that requires radical changes of direction, anticipation, ball tracking and on-the-fly decision-making that are almost completely nonexistent when working with the basket.

The basket can be extremely useful for technical work or when attempting to perfect new skills, but its ability to replicate match conditions is limited. It is important that you allocate an appropriate amount of live ball hitting before and after basket drills to evaluate effectiveness and transferability. If you prefer basket training over live ball hitting or match practice, then ensure that the drills you perform are not only purposeful but also varied as they can easily become monotonous and mundane.

Despite the vast array of innovative drills and exercises that are available to players, remaining mindful that point play is the ultimate goal is fundamental. All too often players become proficient at specific exercises but lack the ability to transfer their skills on to a match court. For example, a common misconception is that when working on technique you should refrain from point play. Quite the contrary. Engaging in point play will afford both the coach and yourself the opportunity to measure progress (or lack of) and make necessary adaptations to future training.

It is easy to become seduced by drills, but the goal of most players is to maximize their abilities when in a competitive environment. Anyone who intends to compete in tournaments should ensure that they devote at least one-third of their practice time to point play each day.

Years of experience, technological innovations, statistical analysis and an improved understanding of cognitive and motor learning has vastly improved the level of coaching and efficiency on the practice courts. However, being tempted to imitate others or simply practice what we think is necessary is quite possibly the biggest mistake any player can make. Using the five “practice hacks” listed here will facilitate an improved training environment that can evoke success.