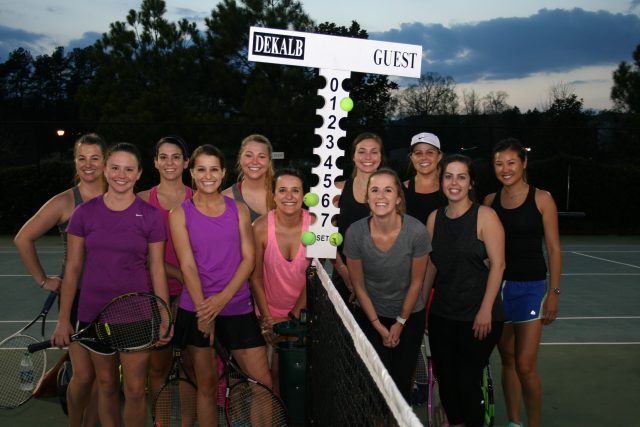 DeKalb Tennis Center is home to a new team of women who are embracing the ALTA culture despite being novices at tennis.

With the growing number of Senior Leagues teams, you might think ALTA was on the way to becoming an anachronism. Not so. Meet DeKalb Tennis Center’s newest, and likely youngest, adult team captained by Kim Desrosiers.

Most of the members are in their mid-20s. The oldest is 30 — if “old” and “30” can be used in the same sentence. And pretty much all of them are new to tennis. “Some girls literally do not know how to keep score,” Desrosiers says. That will change quickly. The Sunday Women’s C8 team is taking lessons and practicing together every week.

Inexperience is evident with some whiffs and misses during practice, but youth and natural athletic ability will have this team competing soon enough for bag tags and championship plates.

A group this large needs two coaches. On one court, four women practice serves and returns. A second court is more than full of moving bodies as the coach leads them in fast-paced drills punctuated with good-natured ribbing. Girl talk is of puppies and babies. There are plenty of giggles and lots of compliments. “Oh, nice,” says one about a teammate’s shot. “Thanks,” replies the partner. “The encouragement sure helps.”

What these women will learn soon enough is that ALTA gets in your blood, and being part of a team is an addiction that lasts a lifetime. Team member Karly Seeloff has witnessed this addiction firsthand. “My mom is on an A-level team out of Eagle Watch,” she says. “I grew up at the courts watching her. She’s really involved with her team.”

Seeloff played a couple of seasons herself out of Eagle Watch. She was on a Junior team with lifelong friend Alicia Lanier, who is once again a teammate on the new DeKalb team. Seeloff ultimately chose dance over tennis. “I’m not very competitive,” she explains. Another current teammate, Lindsey Miller, also played out of Eagle Watch as a Junior ALTA member.

Co-captain Meghan Jackson and Madison Moskowitz might be described as the team’s most seasoned players with seven and eight Junior seasons respectively. Jackson also played in high school, so she was not nervous on court like many of her inexperienced teammates. “Everyone is really into it, but it definitely is a learning year,” Jackson says.

Desrosiers also played tennis when she was younger. “I played one year when I was 8 or 9, but gave up on the sport,” she says. She was eager to pick it up again as an adult, because “it’s a lifetime sport.” She got a racquet for her birthday and once she started hitting with her boyfriend, she knew she wanted to play on a team. “I talked about it with friends for two years, and I finally took the initiative and asked, ‘How many friends are interested?’ I got about 20 women from different friend groups to agree.”

Seeloff is in one of those “friend groups.” She and Desrosiers were roommates and sorority sisters at the University of Georgia, and many of the teammates are similarly connected. “It’s super fun,” Seeloff says. “I didn’t expect to get so much enjoyment out of it. I wasn’t expecting to have that much fun with a sport.”

Another friend who accepted Desrosiers’ invitation was sister-in-law Jennifer Desrosiers, who started playing tennis only recently as a way to stay active and manage her diabetes during pregnancy. “I hit with my husband almost all through my pregnancy,” she says, adding she was more than ready to join the team when asked. And now that she has been bitten by the tennis bug, her daughter — who was 11 weeks old when the season started — is likely to grow up courtside among the team’s many fans.

There is usually a big crowd cheering on the team. “One girl’s boyfriend made a huge cutout of her head and held it up while she played,” Jackson says. “It was hilarious. We think it’s a great way to spend a Sunday. We bring a bunch of food and drinks.” The season finale was a big tailgate complete with Bloody Mary bar.

They are all having enough fun to consider Mixed Doubles, which would give ALTA another new, young team. “It would be nice to play in summer,’ says captain Desrosiers. “But most of us are not confident enough yet.”

If the support and encouragement continues among the young team, that confidence is sure to come.