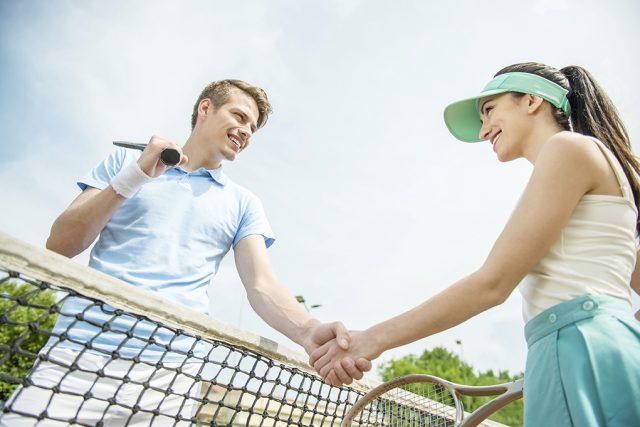 By John Irvin PTR-US, 2015 GPTA Independent Pro of the Year

There are certain things I think captains and their players should keep in mind when looking for a coach. Perhaps you’ve had the same coach for years and want to look in a new direction. Here are some suggestions on how to optimize your choice of tennis professionals and increase your team’s chances to have fun and win.

First of all, your coach needs to understand the difference between teaching men and women. A student of mine in the 1990s called my attention to a study she found that reported: Out of 10 comments a pro makes to a male student, seven should be positive. For females, the number of positive comments changed to nine out of 10. I think male pros in particular have a tendency to make corrections and forget to point out the positives about their players’ games. In addition, men’s and women’s games differ strategically. Women definitely need to stagger their positioning at the net to counter the biggest weapon in women’s doubles: the lob. Some pros still teach tandem positioning for women to attack the net, which leaves them vulnerable to the lob. Former GPTA President Paige O’Neill told me a good rule of thumb years ago: In a staggered formation, the deeper player (positioned around the service line) protects the head of the player closest to the net, while the closer player protects the toes of the deeper player by poaching shots that would land at their feet. These are just a few differences between genders that a good coach should recognize.

Secondly, if your team is composed of lower-level players, you should find a coach who is more of a nurturer than a technician. These players need encouragement. One thing I like to tell my teams is that you may think you’re nervous, but the other team is more nervous than you are. Also, lower-level players need more stroke work than positioning. The ability to execute all shots at least reasonably well is paramount in importance, so the coach should methodically go through forehand and backhand groundstrokes, volleys, serves and a serviceable overhead smash, even if it means stabbing it back deep. After players have a sound stroke foundation to work on, the coach can then expose players to basic doubles positioning.

Third, finding a coach who is certified by the PTR-US or USPTA is a good idea. The big difference between these sanctioning bodies is that the PTR espouses the Standard Method (a progression of teaching strokes in a specific progression developed by founder Dennis Van Der Meer), and the PTA accepts any teaching method as long as it is sound. These organizations conduct rigorous three-part exams that test the pro’s abilities in a written exam, skills exam and practical teaching exam, as well as continuing education for their members. A coach who is certified has a lifelong interest in the game, in addition to a desire to better himself or herself as a tennis professional.

Fourth, look for professionalism. Make sure the pro shows up on time and is reliable. Nothing annoys students more than a pro that shows up late. People are super busy these days and they need to know that their lesson will start and end on time. Some pros will offer to go 20 minutes later if they are 20 minutes late, but this is not a good solution for parents and spouses who have their day timed to the minute.

I asked my good friend Richard Bracken, who is a perennial adult team captain, junior coordinator for Hot Shotz (my junior tennis academy) and USTA volunteer coordinator, what he thought was really important in a coach and he didn’t hesitate to say, “Given that the pro is experienced and knowledgeable, then it’s really important that he or she be enthusiastic.” Ask for a trial lesson with the coach so that you can see just how much they enjoy teaching your team and how infectious that enthusiasm is to your players. The pro will usually be happy to comply for a nominal fee, like half of their normal hourly, but their time is worth something, so I would not ask them to do it for free.

Finding a pro who has a seasonal lesson plan is a plus. I see pros all the time that do the same drill every week — put four players on the service line and let them play out the points with volleys. I think a good coach should address the following: serves and returns, attacking the net, patrolling of the net players, covering the alley, defending the lob, executing (and covering) the drop shot and the different volley types (punch, block angle, reflex and drop). These seven themes will cover the entire season and keep things fresh for the players, who will be anxious to come to the next lesson.

Finally, tap into the GPTA, of which I am a longtime member. Here you’ll find bios and contact information for many top-rated coaches in the country. GPTA professional members are endorsed by a sponsor and certified by the USPTA and/or the USPTR. The GPTA is an association of true professionals who meet monthly to share knowledge and experience with each other, network together and continually learn from some of the most renowned speakers in our industry. GPTA professionals hold each other accountable and stay ahead of the latest progressions and technologies in today’s modern world. GPTA professionals coach smarter and with a renewed commitment to excellence each and every lesson. To find a GPTA professional who coaches in your area, visit gpta.com.